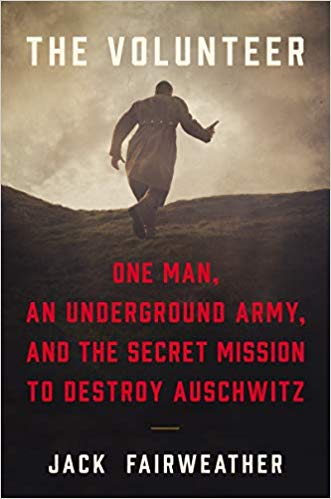 Sometimes during times of disaster and great evil it is the ordinary people who step up to the plate–people no one would have expected to become great heroes.

Witold Pilecki was such a man. A member of the Polish resistance during WWII, he volunteered go to Auschwitz as a prisoner so he could report on conditions to the Allies and expose German atrocities.

Witold was an ordinary man with a wife and two children. Shortly after Germany invaded Poland and the soldiers in his division were killed or scattered, Witold wanted to continue to do his part. So he assumed a fake identity, positioned himself where he knew there would be a German raid, and waited to be captured and taken to the camp. From the camp Witold smuggled out coded messages that made their way back to the Polish resistance, and ultimately to the War Command in London. Witold also helped keep up the morale of prisoners among conditions of unimaginable suffering and fear. The conditions were so bad that in one of his messages Witold begged Allied forces to bomb the camp to put him and the other prisoner’s out of their misery.

Witold was able to gradually develop a resistance network within the camp, mainly among the other inmates but it also included some sympathetic Germans. Using these contacts, he obtained exact details about the numbers of mass executions. Witold watched and documented the transition of Auschwitz from simply one of German’s many prison camps to a machine for killing on an industrial scale.

Many of Witold’s diaries and coded messages have only recently come to light. Last year, journalist Jack Fairweather published an account of Witold Pilecki’s daring mission, following years of meticulous research. The book is not pleasant reading, as the details of what happened at Auschwitz defy comprehension. But at the same time the book is uplifting and inspiring, since it shows an ordinary man working in obscurity to save innocent people.

After the war, Witold continued to be haunted by what happened in the camp, and never stopped writing reports about what he observed. One of these reflections contained the following observation:

“I have listened to many confessions of my friends before their deaths. They all reacted in the same unexpected manner: they regretted they hadn’t given enough to other people, of their hearts, of the truth…the only thing that remained after them on Earth, the only thing that was positive and had a lasting value, was what they could give of themselves to others.”