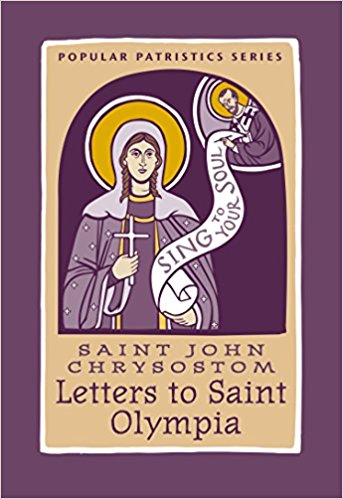 In the early fifth century, the great preacher of the early church, St. John Chrysostom (c. 349–407), made an enemy of the Empress Eudoxia. He had provoked the wrath of the empress by speaking out against an image she had erected of herself directly across from his church, the Hagia Sophia Cathedral. When games were played in front of the idolatrous image, this distracted worshipers from the prayer services. Hoping to silence St. John, Empress Eudoxia sent soldiers to carry him into exile in 404. There followed a period of persecution against those who supported the exiled preacher. Soldiers forcibly broke up church services of those who were loyal to St. John, abusing the worshipers and even stripping ear rings off the women, pulling off parts of their ears in the process. Some of St. John’s followers were even tortured and killed.

St. John’s close friend, the Deaconess St. Olympia, fell into emotional turmoil because of these events. Prior to his exile, St. John had been a mentor to St. Olympia, in addition to working with the deaconess in governing the churches. Their separation left St. Olympia in a state of intense loneliness. In a series of letters to her exiled therapist-pastor, St. Olympia shared how their separation had left her in a state of intense loneliness and despondency.[1] Hoping to encourage the suffering Olympia, St. John wrote a series of replies, urging her to stand strong and not succumb to despair.

Throughout these letters, St. John continually emphasized that God was working in Olympia, not in spite of her vulnerability and emotional pain, but through it. Moreover, he pointed out, when sufferings are received with thanksgiving, we grow in this life and store up rewards in the next. “However great the contest is, the greater the rewards, the more brilliant the crown.”[2] He went on to share that the spiritual profit gained by suffering is especially true of mental and emotional sufferings:

“…consider that however much something is painful to you, by so much will it be more fruitful, if you bear it with thankfulness. This is true not only for wounds of the body, but also for wounds of the soul, which procure crowns which cannot be described when those who are so afflicted bear it with thanksgiving; for distress of the soul is greater than that of the body. Just as, if your body is terribly lacerated and whipped you bear it nobly, giving glory to God for this, you can in return gain a great reward, so also if your soul suffers such things, you can await a vast recompense. Think about this: that if you saw us again, you would be completely delivered from this pain; yet from this pain you will gain great profit, both in the future and in the present.”

Continuing in this vein, St. John showed from the Bible that the spiritual benefit of suffering is not limited simply to those who suffer for the sake of the gospel, as he and St. Olympia were doing. Rather, any type of emotional or physical pain can bring spiritual benefit when approached in the right way.

What is the right way to approach suffering? Throughout his letters, St. John gave St. Olympia step-by-step instructions for turning emotional sufferings into spiritual profit. Here are some tips he offers throughout the letters:

Is Emotional Pain God or Bad?

When I first read through the Letters to St. Olympia, one of the things that puzzled me was that sometimes St. John talked about despair and other types of emotional pain as evils, while at other times he talked about emotional suffering as a means to good. In the former case, St. John urged Olympia to do everything within her power to “throw off this heavy burden of despondency”[4], adding “For when you ought to be doing everything you possibly can to throw off your torment, you do the devil’s will by increasing your despondency and grief. Or do you not know how great an evil despondency is?”[5] At other times, however, St. John wrote about despair as a means to good: “If, therefore, sufferings have great rewards, and despair is the most grievous and most painful of all sufferings, imagine what will be the recompense for it!”[6]

In grappling with this apparent contradiction (is despondency good or bad?), we should keep in mind a crucial distinction St. John makes throughout his letters. On the one hand, when we respond to troubling emotions using one or more of the nine salutary approaches mentioned above, this brings great profit to the sufferer. James talked about this type of profit when he said that trials can be counted as “pure joy” when they lead to perseverance and maturity. (James 1:2-4). Building on this principle, St. John asserts that the more intense our emotional pain is, the greater the opportunity for spiritual profit.[7] On the other hand, if we respond to emotional pain without these salutary approaches (for example, if we add to our pain with negative thoughts,[8] or if we get upset over the wickedness of others,[9] or if we neglect adequate self-care[10]), then we inadvertently assist the devil in our own affliction. This leaves each of us in the vital position of being able to choose whether our emotional pain will be of spiritual profit, or whether it will simply go to waste.

In Letters to St. Olympia, St. John takes both approaches, sometimes focusing on the need to resist disordered emotions because of the spiritual maladies from which they arise, while elsewhere focusing on the blessings available when we patiently accept emotional pain as an opportunity for spiritual growth. Even when we patiently accept emotional pain as a source of spiritual profit, however, St. John still urges us to do everything within our power to throw it off. For example, he advocated various self-care techniques—ranging from special remedies to baths to cognitive reframing activities—in order to advance one’s physical and emotional wellness.

Given St. John’s emphasis on growing through suffering, we might ask why he put so much emphasis on emotional self-care. The answer to this question is found in the final two letters he wrote before the forced march that killed him. In his sixteenth letter to St. Olympia, he explains that even though trials are a cause for us to “leap for joy, and rejoice” nevertheless we should endeavor to avoid trials since they can lead us into temptation.[13] Building on this, in his final letter he returns to the importance of emotional self-care activities, writing “And you yourself—if you would take care of yourself as you ought to, you would get along much better…. But do not therefore either desire your end or neglect your health; for that is not safe.”

Take a moment to reflect on what this means for your own life. Ask yourself some of the following questions:

[1] St. Olympia’s letters to St. John have been lost, but we can reconstruct some of what she wrote based on references to these letters in St. John’s replies.

Pain is Opportunity for Spiritual Growth

[8] St. John was a gentle and patient mentor to Olympia, but he became rather severe when she confessed that she had been increasing her depression through negative thoughts. He quotes her as having written, “I am thinking this simply in order to increase my torment” and “I steadily increase my pain through these thoughts.” St. John replied by suggesting that her own words formed “a huge accusation” against her, adding, “For when you ought to be doing everything you possibly can to throw off your torment, you do the devil’s will by increasing your despondency and grief. Or do you not know how great an evil despondency is?” John Chrysostom, 92.

[9] “For if, concerning our own sins, for which we are about to be held accountable, it is not necessary or safe, but rather it is greatly ruinous and hurtful, to grieve with much excessiveness, much more is it exaggerated and vain to grieve excessively concerning the sins of others—which leave us enfeebled and bruised. This is something satanic, ruinous for the soul.” John Chrysostom, 58.

[10] Throughout the letters St. John shares Biblically-based cognitive reframing techniques that can be used for self-care. On St. John’s use of medicine for self-care, see David Ford’s introduction, footnote 27. In letters #16 & 17, St. John explains why self-care is spiritually important.

[12] This is an example of how much in the spiritual life is not either/or but both/and. We know that sometimes the healthiest thing a person can do is to engage in a head-on fight against certain disordered emotions and the sinful antecedents behind them. For example, in How Dante Can Save Your Life, Rod Dreher shared a protracted struggle against certain disordered emotions that were affecting his health. Through continually battling these emotions with a variety of means—ranging from exercising will power to reading Dante to identifying the ungodly patterns of thought behind the emotional disfunction—Dreher reached a point of being set free from the stranglehold of emotional pain. On the other hand, sometimes a person begins to heal at precisely the moment when he or she stops fighting against emotional pain but actually moves towards it, learning to reconcile the suffering to the reality of her life. Sometimes we need to take a hybrid approach that incorporates the best insights of both these strategies, even as St. John did with Olympia.

[13] “On account of these things we leap for joy, and rejoice, and in this isolation of ours we are reaping the greatest consolation from this courage of yours. And on account of these things we fear nothing, even if you are encompassed with myriads of wolves and great crowds of evildoers. Still, we do pray that the current trials will subside and that other ones will not be added—thus fulfilling the law of our master who commands us to pray that we be not led into temptation.” John Chrysostom, Letters to Saint Olympia, 155; For an historically-informed reflection on the temptations wrought by despondency, see Nicole Roccas, Time and Despondency: Regaining the Present in Faith and Life (Chesterton, IN: Ancient Faith Publishing, 2018), 35–38.