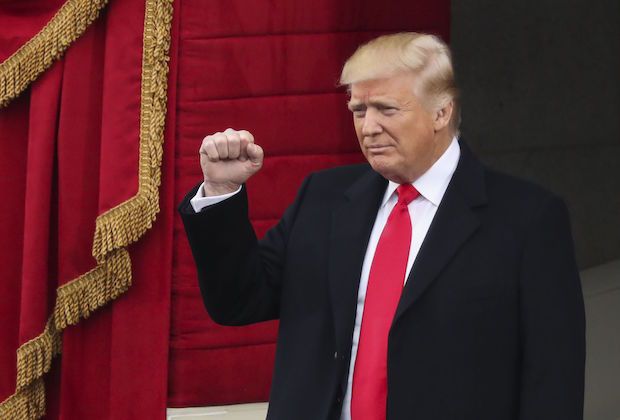 Increasingly, the political order is treated as so much raw material waiting for the imposition of raw will. As questions of ultimate meaning become relativized, naked authority rushes to fill the vacuum. This can be seen at both ends of the political spectrum. On the one hand, we see the autonomous individual being given unprecedented authority over matters that would once have been a matter of politics (see my comments about Planned Parenthood v. Casey here). Simultaneous with this, we see the state adopting an increasingly authoritative posture in which the rule of law becomes an obstacle to the type of change we expect our lawmakers to implement.

Trump rode the wave of this anti-intellectualism straight into office, and it is why the major battles of his campaign so far have revolved around questions of the Executive’s role and scope. Government is ultimately there to deliver the goods to us, whatever it takes. Ironically, this is the same vision of the beneficent state that received such opposition from conservatives when Obama embodied this vision. Where Trump differs from Obama is in how best to achieve the Messianic state, but their fundamental conceptions of the role of government are remarkably aligned.

Accordingly, when Trump aligns himself with conservative doctrines, it is because those doctrines are most suited for achieving his goal of producing national greatness, not because of any prior commitment to the principles behind those doctrines. True to his pragmatist impulses, results are chiefly what matters, while the philosophical questions about the proper procedures for obtaining those results are either irrelevant or obstacles to be brushed aside. For Trump, everything from the courts to a free press becomes the enemy if it stands in the way of implementing his goals.

Trump may have little time for the niceties of serious reflection, but politics remains inescapably philosophical, and this includes politicians whose philosophical commitments remain unconscious and merely implicit. It is difficult to discern Trump’s underlying implicit philosophy because he does not even dabble in ideas. Nevertheless, since being in the White House, a distinct ideology has begun to take shape, and this ideology has been made visible by the intellectuals who are rallying around him. A new academic journal devoted to Trumpism is now on the scene, while Trump’s chief strategist, Steve Bannon, has brought into the White House a self-consistent and well-documented philosophical infrastructure. As we piece together the pieces of this emerging intellectual tradition, a definite ideology starts to take shape.

What is this new ideology that is now remaking the conservative movement? This question can best be answered by comparing Trumpism to the tea party movement that almost captured the Party’s ideological base. The Tea Party hinged on concerns about liberty, the constitution and limited government, as reflected in Ronald Reagan’s words that “The most terrifying words in the English language are: I’m from the government and I’m here to help.” By contrast, Trump sees the government not as the problem but as the answer. One gets the impression that if he could bypass the constitution and rule as a dictator, that he would do so gladly.

When Trump recently addressed CPAC’s annual conference, he revealed just how far the Party’s ideological base has shifted. Republican values are becoming about the power of Trump himself. As Tim Alberta observed in Politico.com:

“In his meandering 48-minute speech, Trump did not once use the words “liberty” or “constitution.” He did not invoke the name of Ronald Reagan, the last Republican president to address CPAC during his first year in office, and to whom he was incessantly compared throughout the week. He made no reference to “government,” in terms of keeping it small, limited or otherwise. And the only time he uttered the word “conservative” was in reference to his triumph at the ballot box. “Our victory was a victory … for conservative values,” Trump declared.

Then, in a stroke of strategic and rhetorical genius, the president conflated those “conservative values” with his own. “The core conviction of our movement,” Trump told his standing-room-only audience, “is that we are a nation that will put its own citizens first.” The crowd ate it up.

To Trump—and to his chief strategist, Steve Bannon, who appeared on a Thursday panel alongside chief of staff Reince Priebus—this means pursuing an agenda of “economic nationalism” that, among other things, restricts trade, subsidizes certain domestic businesses and borrows and spends large sums of money to spur job growth and wealth creation. None of this is remotely compatible with the modern conservative movement, which has been defined to a large extent by its adherence to the principles of free trade, free markets and fiscal restraint….”

It all contributed to the distinct and growing impression that conservatism, rather than expanding to make room for Trumpism, is being swallowed up by it altogether.