The sacramental imagination invites us to rethink one of the hottest topics within Christian apologetics right now: the meaning of “a Christian worldview.”

In 1963, Fr. Alexander Schmemann (1921-1983) addressed this topic of Christian worldview in a study guide written for the Quadrennial Conference of the National Student Christian Federation in Athens, Ohio in December 1963. The students in this group were preparing themselves for a discussion of Christian mission in the contemporary world. Schmemann, who was a liturgical scholar of Russian descent who immigrated to America in 1951, wanted to guide the students’ discussion through helping them to develop a correct understanding of a Christian “worldview.” 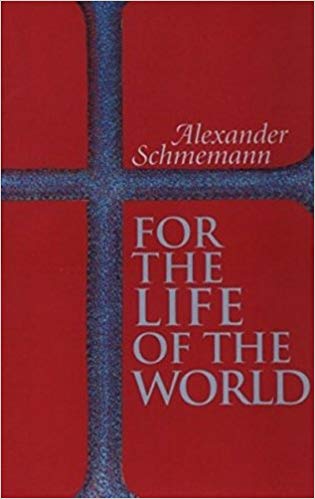 The study guide Schmemann put together eventually became his classic book on the sacramental life, For the Life of the World. Schmemann’s discussion of the Christian worldview challenged the atheistic materialism that was so strong in the sixties. The book was even translated into Russian and secretly circulated in the Soviet Union by the underground samizdat, where it was read by people hungry for the spiritual life.

In addition to challenging materialism, Schmemann also challenged popular Christian misunderstandings about what constituted a “Christian worldview.” In his day, as in our own, there was a growing interest in “spirituality” and “religion”, but these categories often referred to “a world in itself, existing apart from the secular world and its life.” The spiritual life was often conceived as detached from the ordinary world where we eat, drink, love and go to work. Having thus “accepted the reduction of God to an area called ‘sacred’ (‘spiritual,’ ‘supernatural’)”, man no longer sees all of life as infused with the life of God; man no longer sees all of life as gift.

As an historian of the early church, Schmemann knew that some of the earliest Christian theologians had articulated a more holistic vision of the world that stood as a corrective to the “disincarnate and dualistic ‘spirituality’” characteristic of modern Christianity. Schmemann’s invitation in For the Life of the World was to recover this ancient Christian vision, one in which “the whole world is presented as one all-embracing banquet table for man.”

“All that exists,” Schmemann reflected, “is God’s gift to man, and it all exists to make God known to man, to make man’s life communion with God.” Since all of creation exists as a means for communion with God, our natural desire for created things betokens a deeper desire for God Himself. We were designed to commune with God through the ordinary things of this world, even things as basic as eating, drinking and breathing.

“All desire is finally a desire for Him…. The natural dependence of man upon the world was intended to be transformed constantly into communion with God in whom is all life. Man was to be priest of a eucharist, offering the world to God, and in this offering he was to receive the gift of life. But in the fallen world man does not have the priestly power to do this. His dependence on the world becomes a closed circuit, and his love is deviated from its true direction. He still loves, he is still hungry. He knows he is dependent on that which is beyond him. But his love and his dependence refer only to the world in itself. He does not know that breathing can be communion with God. He does not realize that to eat can be to receive life from God in more than its physical sense. He forgets that the world, its air or its food cannot by themselves bring life, but only as they are received and accepted for God’s sake, in God and as bearers of the divine gift of life. By themselves they can produce only the appearance of life.”

This sacramental vision—a vision in which the natural is infused with the supernatural and all of life is bathed with the radiance of God’s grace—formed Schmemann’s challenge to the secularism of his day. Secularism had stolen what rightly belonged to God by claiming the natural world as its own and then circumscribing “the spiritual life” to a small subset of our experience,

“The world is a fallen world because it has fallen away from the awareness that God is all in all. The accumulation of this disregard for God is the original sin that blights the world. And even if the religion of this fallen world cannot heal or redeem it, for it has accepted the reduction of God to an area called ‘sacred’ (‘spiritual,’ ‘supernatural’)—as opposed to the world as ‘profane.’ It has accepted the all-embracing secularism which attempts to steal the world away from God..”

God’s presence in the ordinary things of this world is not contingent on our ability to impose a Christian interpretation as if from the outside (for example, remembering to thank God for all good things or seeing natural realities as evidence of design, as important as these things are). Nor is God’s presence in ordinary things merely instrumental, as a sort of material sign to a spiritual reality, though it certainly includes that. Rather, the sacramental vision recognizes that the presence of the Logos has been breathed into the very structure of the world and the nature of the things within it. When we learn to recognize the world in this way—in the correct way—then we begin to see even mundane things as occasions of wonder, beauty, grace and love. Here’s how Hans Boersma described this sacramental vision in his book Heavenly Participation:

“A sacramental ontology insists that not only does the created world point to God as its source and “point of reference,” but that it also subsists or participates in God. A participatory or sacramental ontology will look to passages such as Acts 17:28 (“For in him we live and move and have our being. As some of your own poets have said, ‘We are his offspring’”), and will conclude that our being participates in the being of God. Such an outlook on reality will turn to Colossians 1:17 (“He [Christ] is before all things, and in him all things hold together”), and will argue that the truth, goodness, and beauty of all created things is grounded in Christ, the eternal Logos of God. In other words, because creation is a sharing in the being of God, our connection with God is a participatory, or real connection—not just an external, or nominal, connection.”