ISIS and the Enigma of Modernity

Marcus Plested has done some important work to try to correct the tendency among Eastern Orthodox Christians to look upon Thomas Aquinas as the arch-villein of Western theology.

Plested is Vice-Principal and Academic Director for the Institute for Orthodox Christian Studies at Cambridge. He is also the author of the book Orthodox Readings of Aquinas, which Andrew Louth summarized at First Things. Louth wrote: 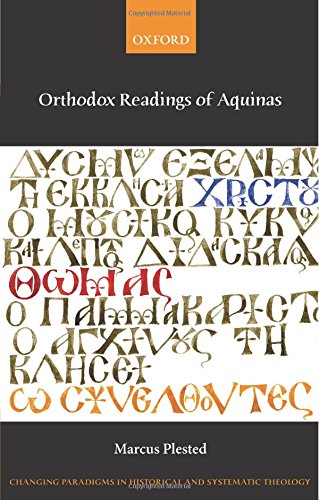 The interest in Aquinas in the Byzantine East in the last century of the Byzantine Empire was not paralleled in the West, where Thomas’s star was already declining in the face of attacks by Duns Scotus and William of Ockham, the rise of nominalism in philosophy, and the dissolution of his rational metaphysics by the “two powers” doctrine in theology. It was only with Pope Leo XIII’s bull Aeterni Patris (1879) that Thomas’s role as the Catholic theologian, the doctor communis, became assured.… Enthusiasm for Thomas was felt throughout the intellectual world of late Byzantium… Despite the recent tendency in Orthodox circles to oppose Aquinas and Gregory Palamas, Hesychasm’s main theological defender, there is little sense of this in the fourteenth century. Prominent supporters of Palamas, such as Nicholas Cabasilas and Theophanes of Nicaea, made enthusiastic use of elements of Aquinas’s theology….

The astonishing receptivity to Aquinas among Orthodox thinkers seemed to falter in the last century. Aquinas became a cipher for the alleged failures of the West: a narrow, juridical rationalism, an overweening confidence in human understanding of God.

I have not read Orthodox Readings of Aquinas, but I have read Plested’s essay “Byzantine Readings of Aquinas” in the volume Orthodox Constructions of the West. This book was put together from the papers presented at a conference sponsored by the Orthodox Christian Studies Center at Fordham University in 2010, where various scholars attempted to critique the hermetic self-definitions of Orthodoxy that emerge from a simplistic approach to East-West narratives in theological discourse. In Plested’s essay on Aquinas, he summarizes evidence he amassed from painstaking study of theological writers during the late Byzantine empire, demonstrating that Eastern thinkers were able to have a sophisticated level of critical engagement with Aquinas’ thought. Significantly, only one Byzantine writer ever spoke of Aquinas as the apotheosis of Western error in the type of way that would become commonplace for twentieth-century Orthodox writers. Here is what Plested writes considering the reception of Aquinas into Byzantine scholasticism:

The Palamite party itself betrayed no particular animosity to Western theology per se. Palamas himself was impressed by Augustine, drawing discretely on Maximos Planoudes’s translation of the De Trinitate, and making intriguing use of some Augustinian themes and concepts. As heir to a long tradition of Byzantine Scholasticism, he vigorously defended in Aristotelian terms the proper use of reasoned argumentation against the theological agnosticism of Barlaam, even going so far as to defend the Latin use of the syllogism….the supposition of methodological incompatibility between East and West is deeply flawed. The considerable enthusiasm for Aquinas across party lines–Palamite and anti-Palamite, unionist and anti-unionist–shows that the situation is far more subtle and complex than such a supposition would imply. Indeed, I know of only one Byzantine critique of Thomas that asserts methodological incompatibility in wholly unambiguous terms. …instinctive hostility to the Scholastic method is, to repeat, relatively rare on the level of sustained theological discourse. It remained perfectly possible in the Byzantine world to receive Western theology sympathetically without compromising one’s Orthodoxy….

The Byzantines who welcomes Thomas did so in a critical fashion. They were quite capable of a sophisticated mode of reception that did not necessarily lead to any form of doctrinal compromise. They also welcomes him not as an alien import from a superior culture but as one of their own, as an exceptionally able exponent of traditional Christian Aristotelianism rooted in Scripture and in the Fathers. It is by no means far-fetched to see in this reception the recognition of the common tradition of Greek East and Latin West, a Christian universalism that was certainly disintegrating but was by no means dead in the water even in the fourteenth century.

Modern theologians, Orthodox and Catholic alike, have tended to take this disintegration of Christian universalism as a given, reading back into the last years of Byzantium a theological gulf that is simply not in evidence at the time. The Byzantine reception of Thomas must prompt us to seriously reconsider the whole issue of theological incompatibility between East and West….

If we are indeed to move beyond the dialectical theologizing that has characterized Orthodox theology in the twentieth century, then the Byzantine reception of Aquinas may serve as a useful starting-point…. It means, in short, regaining the ability to recognize orthodoxy in unfamiliar garb and eschewing any hermetic and reactive form of self-definition. Eastern Orthodoxy is of little value as long as it remains merely Eastern. If Orthodoxy is to have any real purchase in the twenty-first century it is going to have to be both oriental and occidental. Light from the East indeed, but also light from the West.