Purity Culture from Foucault to COVID 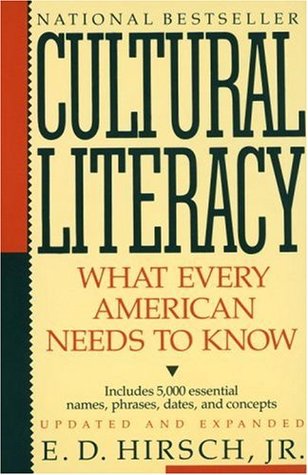 In his 1987 bestseller Cultural Literacy: What Every American Needs to Know, E.D. Hirsch argued that we will never be able to lift members of minority groups out of poverty until we fundamentally change how we think about literacy and education.

Hirsch, who is professor emeritus of education and humanities at the University of Virginia, attacked popular educational theories going back to Rousseau and Dewey by showing that training for effective communication requires training in a shared culture, and “shared culture requires transmission of specific information to children.” Noting “a connection between background information and the ability to hold positions of responsibility and power,” he drew attention to “the importance for blacks and other minorities of possessing this information, which is essential for improving their social and economic status.”

“Blacks will be condemned in perpetuity to oversimplified, low-level tasks and will never gain their rightful place in controlling the levers of power unless they also acquire literacy in this wider cultural sense.”

What is this background information that enables a person to flourish in our culture? Hirsch believed “cultural literacy” involved everything from knowing about Micky Mouse and nursery rhymes to a basic familiarity with the classics. Access to this shared background knowledge helps incubate students in the type of mature literacy required for effective listening and communicating in modern America.

“The explicit words are just surface pointers to textual meaning in reading and writing. The comprehending reader must bring to the text appropriate background information that includes knowledge not only about the topic but also the shared attitudes and conventions that color a piece of writing.”

What Hirsch found about literacy is relevant after a string of recent high profile attacks against the classics from black professors. Indeed, within the African American community, there is a strong movement to conceive the value of the classics simply for their utility value. The poster child for this view is Princeton classics professor, Dan-el Padilla Peralta.

While living in a squalid homeless shelter in Chinatown following his family’s immigration from the Dominican Republic, Peralta encountered a classics textbook. Writing about his experience in The New York Times, Rachel Poser described how Peralta experienced a youthful desire to be transformed by the classics. Peralta was attracted to a certain cast of mind that he found in the classics, that contrasted to the squalid poverty around him. Through studying the classics, Peralta lifted himself out of poverty, eventually gaining a full-ride scholarship to Princeton to study ancient Greece and Rome. Today Peralta is one of the leading specialists on the Roman Republic and early Empire.

In February this year, New York Times ran a profile on Peralta, describing how he moved from his youthful love of the classics to believing that the discipline needed to be pragmatized. The paper reports how initially Peralta studied the classics simply because he loved the subject, and believed the discipline had value in and of itself. Yet Peralta received push-back against this belief from some of his closest friends. As a black man, Peralta had many friends who wanted to know how his study of classics would specifically help their cause as social justice warriors. If the classics could not help with an activist agenda, then are they even a worthy pursuit for a black man? Peralta responded to these concerns by defending the intrinsic value of the classics. Drawing on his boyhood love for Greece and Rome, he argued that these subjects were intrinsically valuable, regardless of their political utility.

Eventually Dan-el Padilla Peralta’s perspective did begin to shift as he surrendered to his critics. The NY Times profile reports that he became troubled by the perceived lack of practical utility in the classics until he eventually abandoned the position that the literature of Greece and Rome have inherent value.

“He found he wasn’t completely satisfied by his own arguments. The question of classics’ utility was not a trivial one. How could he take his education in Latin and Greek and make it into something liberatory? ‘That became the most urgent question that guided me through my undergraduate years and beyond,’ Padilla said.”

Now he cringes at his earlier desire to be transformed by the classics.

“Padilla has said that he ‘cringes’ when he remembers his youthful desire to be transformed by the classical tradition. Today he describes his discovery of the textbook at the Chinatown shelter as a sinister encounter, as though the book had been lying in wait for him.”

In coming to these realizations, Peralta tried to unlearn much of his earlier education, a process he refers to as “the decolonization of my mind.”

Peralta is only one academic, but he represents a growing movement that the classics should be pragmatized. Now that Peralta believes the classics possess a merely instrumental value within the context of activism, what type of scholarship is he doing? His various pursuits include trying to raise attention to the problem of “whiteness” in the classics. According to the type of scholarship he is now pursuing, Greek and Roman language and literature are intrinsically bound up with white supremacy.

As this type of pseudo-scholarship gains traction, many black students find themselves asking the question that plagued Peralta: are the classics even a worthy pursuit for a black person? Do the classics have to be turned into a utilitarian tool for social justice activism before their value can be justified for African Americans?

In responding to these questions, and to the movement Peralta represents, it is important to hold in tension the following two truths:

On the surface there seems to be a tension between these two statements, because I am saying that the classics do have utility value, and also that we must approach the classics independent of pragmatic benefits. Zena Hitz’s recent book Lost in Thought: The Hidden Pleasures of an Intellectual Life, clarifies this tension with a fascinating discussion of the dialectic of usefulness and uselessness. From my recent review of Hitz’ book:

For Hitz, the intellectual life is like a love affair, or like prayer. There are many economic and health benefits to a love relationship, yet if a man holds his wife’s hand merely to experience those benefits, then we rightly say this is perverse. Such perversity will likely rob him of the very benefits a love relationship might otherwise bring. Similarly, there are many neurological and personal benefits to prayer and worship, but if a woman worships God merely to boost her brain, then that is perverse and, ironically, she will miss the irreplaceable benefits of prayer. Similarly, there are many uses for the liberal arts, but if one approaches the intellectual life simply for its pragmatic value, then one is in danger of missing that which makes the liberal arts useful in the first place. Hitz hints at this paradox in the title of the last chapter of her book, “The Uses of Uselessness.”

And again, from a post this week at Salvo Magazine:

“…paradoxically, the classics become most useful when we approach them, not simply for what we can get out of them, but on their own terms. The classics enable us to be in the presence of Greatness and to nourish ourselves on goodness, truth, and beauty; they offer us a particular cast of mind that pushes back against our modern fixation with efficiency and productivity. As we are educated with these models we will become richer people who will, naturally, make a difference in the world. But the usefulness of the classics is not where we start, for if we approach the classics simply as fodder for activism, we will lose that which makes them useful in the first place, in the same way we will lose the benefit of friendship if we approach our friends simply for what we can get out of them.”

The Theology of Art and the Importance of Beauty

C.S. Lewis exemplified the dialectic between the usefulness and uselessness of good literature and good education. On the one hand, he is a poster child of someone who benefited from a good education, and especially from studying the classics. Yet Lewis shared in Surprised by Joy that his education began in the big library in his father’s house where he learned to love good literature for its own sake, and not merely for its utility value. In his book An Experiment in Criticism he showed the first step in appreciating a book is surrender, as we take the book on its own terms and not merely for what it can do for us. Paradoxically, it was precisely because Lewis was able to suspend preoccupation with himself to treat books in this way that he was able to derive so much benefit from them, and to help so many thousands of people as a result. (For more about Lewis’s views on non-utilitarian approaches to reading, see Donald Williams’ Touchstone article, “Literature for Wisdom.”)

Other contemporary scholars have echoed Lewis. From Gracy Olmstead’s article for The American Conserva, “How Did You Read This Summer?“:

“Ironically and importantly, the goods that result from reading—such as deeper understanding or greater cognitive focus, for instance—only come when we fully commit ourselves to the text for its own sake, and not for its side effects.

My friends, let us neither deny the practical value of great literature, nor approach great texts merely for their functional benefit. And above all, let us not cancel the classics, either directly through closing down classics departments, nor indirectly by reducing their value to a utilitarian tool.

I’ll leave you with a couple quotes from Lewis’s An Experiment in Criticism:

“Those of us who have been true readers all our life seldom fully realise the enormous extension of our being which we owe to authors. We realise it best when we talk with an unliterary friend. He may be full of goodness and good sense but he inhabits a tiny world. In it, we should be suffocated. The man who is contented to be only himself, and therefore less a self, is in prison. My own eyes are not enough for me, I will see through those of others. Reality, even seen through the eyes of many, is not enough. I will see what others have invented…. In reading great literature I become a thousand men and yet remain myself. Like the night sky in the Greek poem, I see with a myriad eyes, but it is still I who see. Here, as in worship, in love, in moral action, and in knowing, I transcend myself; and am never more myself than when I do.”

“The first demand any work of art makes upon us is surrender. Look. Listen. Receive. Get yourself out of the way. (There is no good asking first whether the work before you deserves such a surrender, for until you have surrendered you cannot possibly find out.)”