Censorship and Hysteria: Two Sides of the Same Coin

In their book The Teaching Gap, James Stigler and James Hiebert discuss the differences between how math is taught in American classrooms vs. Japanese classrooms. Their observations were based on extensive video footage of eight-grade classrooms in both countries (plus Germany) in research aimed to identify general teaching patterns and differences. Was there a specifically American way of teaching that might help to explain why American is lagging behind other nations in math scores? 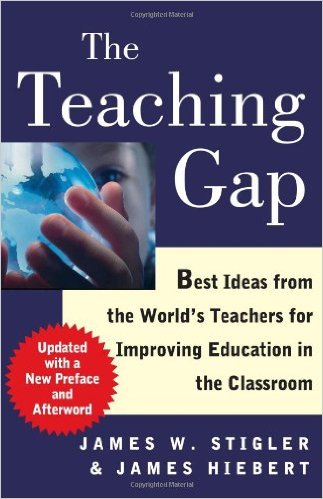 What we can see clearly is that American mathematics teaching is extremely limited, focused for the most part on a very narrow band of procedural skills. Whether students are in rows working individually or sitting in groups, whether they have access to the latest technology or are working only with paper and pencil, they spend most of their time acquiring isolated skills through repeated practice. Japanese teaching is distinguished not so much by the competence of the teachers as by the images it provides of what it can look like to teach mathematics in a deeper way, teaching for conceptual understanding. Students in Japanese classrooms spend as much time solving challenging problems and discussing mathematical concepts as they do practicing skills….

“One of the reasons we dubbed American teaching ‘learning terms and practicing procedures’ is that lessons in the United States seemed to place greater emphasis on definitions of terms and less emphasis on underlying rationale. When we counted the number of definitions presented in all lessons, we found that there were about twice as many in the United States as in Germany or Japan.

“One way to tell how deeply the mathematics is being developed is to look at the kind of reasoning that was required. In Mr. Eisner’s lesson [the German teacher], the task required deductive reasoning, a hallmark of mathematical thinking. One begins with a statement that is accepted as true and builds a logical chain of observations to reach a conclusion that is, necessarily, true. In mathematics, deductive reasoning is often found in proofs. As it turns out, there were no mathematical proofs in U.S. lessons. In contrast, there were proofs in 53 percent of Japanese lessons and 10 percent of German lessons. Whatever students in the United States were doing with the definitions, they clearly were not using them to develop proofs of mathematical relationships.

From Ancient Wisdom to Modern Classroom

“Japanese lessons appear to be generated by different beliefs about the subject. Teachers act as if mathematics is a set of relationships between concepts, fact,s and procedures. These relationships are revealed by developing solution methods to problems, studying the methods, working towards increasingly efficient methods, and talking explicitly about the relationships of interest.

“On the same questionnaire, 73 percent of Japanese teachers said that the main thing they wanted their students to learn from the lesson was to think about things in a new way, such as to see new relationships between mathematical ideas.

“Japanese teachers also act as if mathematics is inherently interesting and students will be interested in exploring it by developing new methods for solving problems. They seem less concerned about motivating the topics in nonmathematical ways.”