Zwingli and the Visible vs. Invisible Dualism

I love The Calvinist International website. The Protestant world needs more Calvinists like the people who write for this site – Calvinists willing to return to their rich heritage after so many churches in America have truncated reformed theology to be about little more than the tulip. Those who, like myself, have completely abandoned Protestantism, would do well to be well-versed in what TCL calls “the old evangelical tradition, most of which is still largely forgotten”, before launching into historically misinformed tirades against evangelicalism.

That said, my recommendation of the website is not without qualifications. Many of their writers could practice a little more intellectual charity towards their opponents, including being a little more selective in the pejorative adjectives used to describe those with whom they disagree. I would also like to see their method of resourcement significantly widened to include more extensive engagement with the breadth of what is available from the classical Christian tradition.

Altogether, however, I have no hesitation in directing people over to the site. I wanted to emphasize this so that my ensuing remarks are not misunderstood.

Many of the writers associated with TCI have been concerned to avoid a simplistic ideas-drive-history approach to historical causation, especially when combined with fall narratives. Even the term “worldview” is something these authors typically avoid, in part because of its association with simplistic approaches to history (it also has associations with Kuyperian epistemology, which is another matter). In his article ‘Getting over “Fall” Narratives‘, Steve Wedgeworth explains about his own journey away from simplistic historical retellings — an approach he associates (perhaps unfairly) with authors like Brad Gregory and Alasdair MacIntyre. Peter Escalante raised similar concerns when interacting with Brad Gregory’s The Unintended Reformation, which he saw as involving “simplistic genealogical explanations.” In Escalante’s criticism, one of the problems is that Gregory “thinks that ideas drive history.” (Next time I’m in Moscow Idaho I will have to ask Peter how he reached that conclusion, given Gregory’s meticulous attention to the causative potency of economics and material factors.)

Of course, we should avoid a simplistic ideas-drive-history approach to historical causation. However, my concern is that this recurring angst of worldview-based historiography can sometimes result in over-simplifying the historical record (I give some examples here). If there is anything I have learned from my reading of history, it is the need to have a healthy skepticism about ANY a priori framework for interpreting the historical data, including the anti-big-story framework. Is there a danger that in too rigidly trying to avoid the problems associated with “historicizing” or intellectualist historiography” or “worldview-analysis” or “grand narratives” or “idealism”, that we might blind ourselves to situations where there really is good empirical evidence for a qualified ideas-drive-history approach? I do think this is a danger.

I used my recent post on Chapter 2 of The Benedict Option to offer a more detailed treatment of exactly how ideas can initiate historical change, as well as to interact a little more specifically with some of the articles at TCI. In the process, I argue that

Absolved From Being Good-Mannered: The Romantic Totalitarianism of Jean-Jacques Rousseau

To learn more, visit my article ‘Do Ideas Have Historical Consequences? A Defense of The Benedict Option Chapter 2.’ 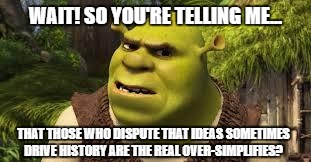 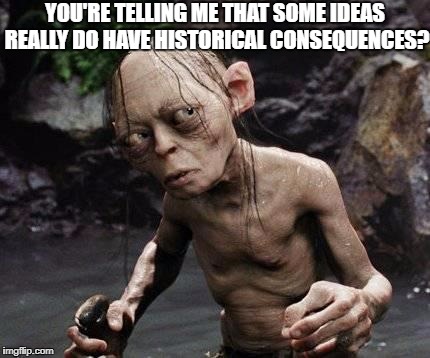