Today marks the beginning of Screen-Free Week, when children throughout the nation are encouraged to unplug from the screen to rediscover the joys of childhood, the richness of relationships, and the adventure of stillness.

In anticipation of Screen-Free Week, I spent some of my weekend reviewing a number of studies on how digital addiction and information overload is re-writing our children’s brains. I summarized some of these studies in my TSM article “The Dangers of Digital Addiction and Information Overload: How I Discovered that Silence is Good for my Brain.”

One piece of research that was fascinating (and somewhat alarming) was that even if you’re not using it, simply being able to see a smartphone hinders a person’s ability to focus on tough tasks. Having a tablet or smart-phone in the room, whether or not one actually uses it, leads to a reduced attention span, poor performance on tasks, especially tasks requiring high levels of attention or cognitive abilities. The mere presence of a smart-phone in the same room also weakens a person’s ability to connect with other people, especially when something meaningful is being discussed. 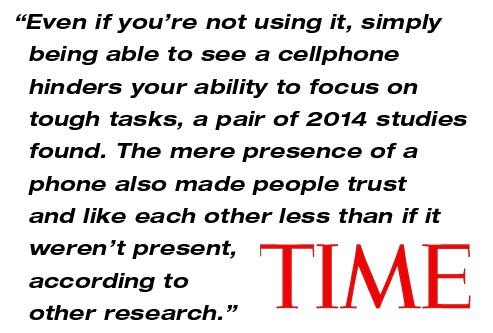 This may have to do with something called “switch cost” (the loss of attention when we’re pulled away from a task, even if only for a split second to glance at a message). Earl Miller, professor of neuroscience at MIT, says that switch cost has an effect on the brain’s ability to focus that lasts up to 15 or 20 minutes. The worst effects of switch cost occur in the first 64 seconds after checking one’s email regardless of whether or not there was a message of significance. Because of this, it’s probable that the average office worker wastes at least 8.5 hours a week figuring out what he or she was doing moments before.

Bottom line: if you are trying to concentrate on a task, studying or spending time with another person, remove your smartphone from the room.

To read more about this research, visit my TSM article “The Dangers of Digital Addiction and Information Overload: How I Discovered that Silence is Good for my Brain.“