The Truth About the Border Wall

UPDATE: Two days after posting this, the President took my advice, effectively calling the Democrat’s bluff. Can anyone still take Nancy Pelosi’s sophistry and word-games seriously? 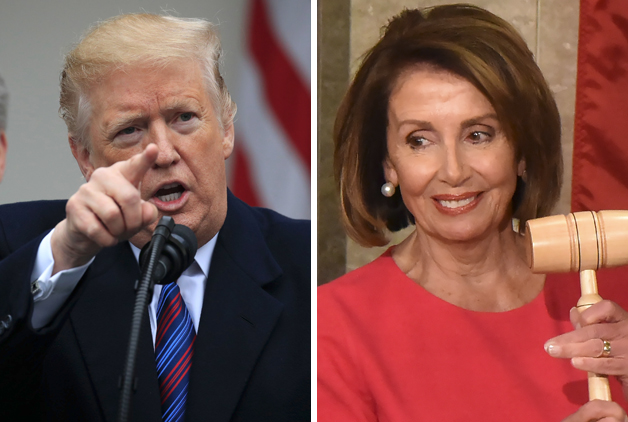 There appears to be no end in sight on the stalemate about how to resolve the government shutdown.

The issue is not that Pelosi can’t budge because of genuine concern about the impact a $5 billion border wall will make on the economy. Everyone knows that the economic cost of the shutdown is about to exceed the amount the President is demanding for his wall. So what is really going on?

Once we properly answer this question, the solution from the President’s perspective becomes breathtakingly simple.

What is really going on is that House Democrats want Trump to appear bad, and do not want themselves to appear weak after digging themselves into an intractable position. Consider that if the shutdown were to lead to starvation and social disaster (something that may be approaching sooner than you think), Pelosi may still be unwilling to compromise as long as Trump is getting the blame. Polls indicate that most Americans are indeed blaming Trump for the shutdown, which means that from Pelosi’s perspective the worse the situation becomes, the better it actually is, since more Americans will dislike Trump and vote Democrat in the next election.

Admittedly, this is a very cynical way of looking at things, and it flies in the face of what Pelosi has been telling the public. Officially, her line remains that she is the one who wants to transcend petty politics, that she is the adult in the room contending against a president who is, as she put it, “holding the American people hostage.” To fortify the impression that she is willing to compromise, democrats are passing spending bills they know the President will not sign. The narrative they are projecting is that the House majority are trying to end the shutdown in the face of a stubborn and immovable President.

So what’s the solution? Simply this: Trump should call Pelosi’s bluff. He should offer her a compromise on his terms but which still leaves him on top in the symbolic and psychological power struggle. For example, instead of asking for $5 billion to start the wall, maybe he could ask for $2 billion to start it, or $30 billion for general border security without the wall, or maybe a package that includes only $1 million for the wall and $9 million for ramping up general border security. That sort of thing.

Here’s why I think this is an obvious solution. If Pelosi responded by granting the President’s modified terms, that would be a huge symbolic victory for Trump. The wall could start being built; Trump’s base would love it and could point to it as one more example of shrewd statesmanship under the guise of bombast. We all know that Pelosi will want to avoid the impression of granting Trump even the most nominal victory on the wall, and so she would probably refuse even $1 million to get it started and reopen the government. But such a refusal would simply call her bluff and demonstrate to the public that Pelosi is just as stubborn and intractable as Trump. Moreover, her refusal might help to shift the blame for the shutdown over to House Democrats. “Gosh,” people will begin ask, “if even Trump is willing to compromise, why can’t Pelosi?”

To the extent that Pelosi has framed the border wall controversy in moral rather than prudential terms (for example, pronouncing that because the border wall is “immoral” the Democrats will never agree to fund it), she has effectively painted herself into a corner. Thus, if Trump requested something that was merely a nominal and symbolic victory for himself (say, requesting a million just to start the wall), then it would put Pelosi in a dilemma: she couldn’t meet Trump in the middle without being accused of back-tracking on her earlier statements, and yet to not agree to something that small would also powerfully demonstrate just what type of dispute this really is for her.

Thomas Paine, and the Birth of Leftism

What type of dispute is this for Pelosi? From our earliest fights on the playground to the most complicated disputes within marriage, we all know that specific issues become important when they are emblematic of deeper power-struggles and principles that operate in the background, perhaps without being clearly acknowledged. This is just such a dispute: it is not about what Pelosi actually thinks is best for America (remember that the shutdown is about to exceed the amount the President has requested) but about winning her power-struggle with Trump, or continuing it as long as most Americans continue to blame him for the shutdown.

If this reading of things is correct, then it’s time Trump called Pelosi’s bluff by creating a lose-lose situation for her: if she refuses to grant Trump even a reduced proposal on border security, she is highlighted as the one unwilling to compromise; but if she does grant a modified proposal, Trump emerges as the symbolic winner of the power struggle. Then government can re-open and hundreds of thousands of workers can return to their jobs.

Help me publicize this simple solution to the shutdown by liking and sharing my post about this on my Facebook author page.