Strengthening the Habits of Virtue 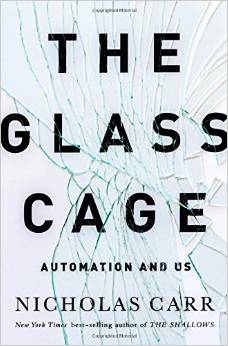 Having benefited so much from Nicholas Carr’s book The Shallows: What the Internet is Doing to our Brains, I was eager to read his latest book The Glass Cage: Automation and Us.

The book is about the consequences for humanity when so many of our tasks – from driving airplanes to keeping medical records – are increasingly being handed over to machines. You can be sure I’ll have plenty to share from this book in the days ahead since it relates to my ongoing interest in how hyper-pragmatism is forcing us to renegotiate what it means to be human.

For now I wanted to share a point Carr made along the way that is subsidiary to his overall theme but which relates to something I shared in my earlier post ‘Nine Things I Wish Someone Had Told Me About Parenting Teenagers‘ (It also relates to the Christian insights in the excellent book The Whole-Brain Child: 12 Revolutionary Strategies to Nurture Your Child’s Developing Mind.)

Point #9 of the aforementioned post was that parents of teenagers need to attend to the overall atmosphere of the home through (among other things) not correcting their teenagers in a spirit of anger and frustration. As I explained,

It is better to ignore problems completely than to deal with your teenager in an attitude of harshness, frustration and anger. Thus, the first step to keeping a healthy atmosphere in the home is not to yell, to avoid outbursts of wrath and to be careful to preserve (as much as it depends on you) an environment that is free from stress.  If you are upset at your teenager about something, wait until you’ve calmed down before talking to her.

In the early 20th century, the psychologist Robert Yerkes did a number of experiments on dancing mice. The mice were placed in a wooden box that had two passageways at the end of it, a black passage and a white passage. Any mouse venturing into the black passageway received a nasty electric shock. The purpose of the experiment was to see how long it would take the mice to learn that the black passageway was bad. Certain mice were given a weak electric shock when they went into the black passageway, while others were given a moderate shock. Still others were given a very strong shock. Which of the mice learned the quickest that the black passageway was undesirable? While you might think that the mice who received the nastiest shock would have been the quickest to learn, this was not the case. The mice that learned the fastest were those who received a moderate form of discipline. The experiement was repeated by giving the dancing mice a harder navigational challenge, and again the researchers found that “when the mice faced a really tough challenge, both an unusually weak stimulus and an unusually strong stimulus impeded their learning.” In the language of Goldilocks, it had to be “not too cold and not too hot, but just right.”

The application to human beings should be obvious: humans, like dancing mice, learn best when they are challenged moderately, but not when they are overwhelmed. 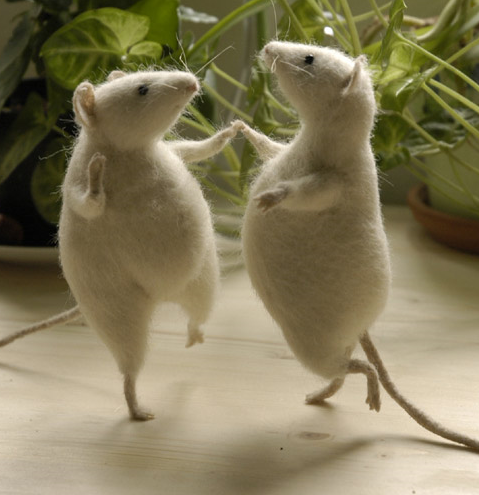 Some of my readers may be uncomfortable inferring anything about human beings from studies of mice. But while we need to be careful, we do know that there is a surprising amount of continuity between how human beings learn behaviors and how rodents learn behaviors. And in the case of the experiment with dancing mice, this simply illustrates a principle that we already know to be true on other grounds, namely too much stress and severity is antithetical to healthy human functioning and human learning. This is why we often see similarities in the outcome of children whose parents who are too loose and children whose parents are overly strict. Both are avoiding the really effective type of parenting which is consistent moderate discipline (and I am using discipline in the broadest sense here).

Commenting on the implications of the dancing mice study, Nicholas Carr writes as follows:

At very low levels of stimulation, the person is so disengaged and uninspired as to be moribund; performance flat-lines. As stimulation picks up, performance strengthens, rising steadily along the left side of the bell curve until it reaches a peak. Then, as stimulation continues to intensify, performance drops off, descending steadily down the right side of the bell. When stimulation reaches its most intense level, the person essentially becomes paralyzed with stress; performance again flat-lines. Like dancing mice, we humans learn and perform best when we’re at the peak of the Yerkes-Dodson curve, where we’re challenged but not overwhelmed. Art the top of the bell is where we enter the state of flow.

Do What Comes Naturally…But Work at it

Effective parenting is a dynamic matter of being so in tune with your child that you find that Goldilocks level, which will be different for each child. Children are so different that what constitutes moderate discipline for one child could be overwhelming severity for another. Moreover, even moderate discipline is ineffective in achieving the ultimate telos of Christian parenting if it is not conducted within a larger context of loving nurture and the type of joyful lived-out-Christianity that instills in the child’s heart a deep sense that Christianity is lovely and attractive.

One of the reasons this is important to me is because I often see that too much leniency with children breeds situations where there is too much severity, including the type of severity which we know from the dancing mice experiment doesn’t actually work. This will become clear if we consider the type of scenario that is fairly common in families today.

Imagine a 10-year old boy named Jimmy is playing with his stuffed animals downstairs. Dad comes along and tells Jimmy that it’s time to stop playing and do his chores. Jimmy says “ok”, but instead of obeying right away, his keeps on playing. So Dad tells Jimmy again to go upstairs and do his chores, but Jimmy replies “Just a minute and I’ll do it.” Thinking the easiest route is the one of least resistance, Dad settles for delayed obedience over instant obedience, hoping Jimmy is about to obey him. So Dad goes about his affairs and forgets about it, but when he comes downstairs to fetch something 15 minutes later, he finds Jimmy still there playing with his stuffed animals. Now Dad is raging, and exclaims angrily, “I told you 5 times to go and do your chores, and you are still down here playing! Why can’t you learn to obey me right away?!!” But, of course, Dad has no business being angry, because Jimmy doesn’t take his parents commands seriously because he knows that his parents don’t take their commands seriously. In particular, Jimmy knows that he does not have to really obey until his parents get upset. Once the parents get upset and lose control, then Jimmy knows has has to obey, like the mice receiving the severe electric shock ran out of the black passageway. But in the case of both Jimmy and the mice, they did not actually learn; that is, they did not habitualize the behavior. Jimmy was exposed to no training followed by angry training, and thus missed out on the type of consistent moderate discipline (remember I am using ‘discipline’ in the broadest sense here) that is a precondition to effective learning.

The criteria for assessing our effectiveness as parents is not whether we are successful at getting our child to obey us in any one given situation; rather we want the child to take something away from the interaction that he will be able to apply in other contexts. I can force my child to do anything by being heavy-handed, but the child is not learning obedience since high-stress situations are antithetical to the optimum learning environment. As parents we are aiming not just for isolated results in particular situations, otherwise being heavy-handed would be a good solution; rather, what we after striving for is learned behaviour that can be habitualized. Just as the mice receiving the severe electric shock did not easily learn that the black passageway should be avoided, so a child who is trained in anger and stress is not going to learn that disobedience is unacceptable. What then occurs is a vicious cycle. Because the child is being trained to disobey until the parents get angry, that learned disobedience then creates the context whereby parents are stimulated into further anger. Not only does this create a negative atmosphere in the home, but as an effective method of training children, it doesn’t even work.