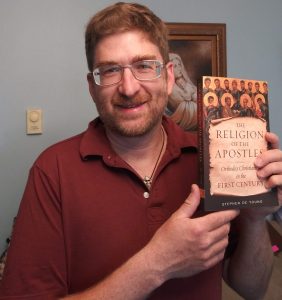 From the beginning, God’s rule of the world was not direct but mediated, as Scripture shows Him ruling the world through a court of spiritual beings, or “heavenly hosts.” This is implicit in a couple common phrases from Scripture, which Fr. Stephen De Young unpacks in his book The Religion of the Apostles: Orthodox Christianity in the First Century:

In the Scriptures, the hosts of angels, archangels, thrones, dominions, virtues, principalities, powers, cherubim, and seraphim are predominantly described using one of two metaphors. The first—already alluded to in the previous sentence—is that of the “heavenly hosts.”… The second metaphor used to describe noetic beings is that of the divine council. Simply put, the God of Israel is depicted in the Scriptures as a king enthroned, ruling over His creation. The angelic beings, then, are part of His royal court, a divine council, over which He presides.

You can’t read very far in the Old Testament without seeing that this royal court is part of the mechanism whereby Yahweh rules the earth. Fr. Stephen De Young has done an enormous work  by collecting together in one place all the references to God’s court, and putting this teaching in dialogue with the wider religious tradition of the Ancient Near East through to the time of Plato.

Fr. Stephen shows how this understanding that the Most High rules the earth through a court or council of other beings helps us make sense of a practice widespread in the Second Temple Period, namely offering prayers to angelic beings, who interceded to God on behalf of humans and represented their causes in the divine council. The Jews of Jesus’s day did not believe that the Most High ruled alone, but that his governance was mediated through angelic beings who could be invoked. (For a discussion of specific texts about this, listen to THIS episode of Fr. Stephen’s podcast.)

The flip side of this is that when the spiritual powers rebelled, they continued sharing the governance of creation but in subversive ways. Thus, the Old Testament shows that certain false gods and fallen angels—rebellious members of the divine council—have dominion over different nations, people groups, and planets. For example, ancient Thessalonica was devoted to the worship of Aphrodite; the goddess Athena was the patron of Athens; Ephesus was devoted to Artimis. Different professions looked to different gods as their benefactors and protectors, so that the ancient pagan world was obsessed with pacifying the various divinities and demigods that tyrannized them.

One of the most popular texts in circulation in the Second Temple Period told of a human person who would one day ride on the clouds and ascend to heaven to take his seat at the side of the Most High to rule the nations. This text, of course, is the book of Daniel, and its messianic prophecy of 7:9-14. This prophecy told how there would be an ascension of a human figure (a “Son of Man”) rising to the top of the divine council to rule the peoples, nations, and languages that had previously been ruled over by rebellious angels (referred to in the book of Daniel by the nations they ruled over, such as “prince of Persia” and “the prince of Greece”).

When standing before Pilate, Christ cited the prophecy of Daniel 7 and applied it to Himself (Mark 14:61-63). The ascension event, described in Acts 1:9 and elsewhere, explicitly invoked Daniel’s image of the Son of Man rising to take His seat at the Divine Counsel. Later theological reflections on the ascension (for example, Eph. 4:8-16) make clear that at the ascension, Christ overthrew the dark powers that had been reigning over the people, nations, languages, and planets. That is, when Christ ascended, the rebellious entities were cast out of the divine council, and Christ reclaimed the thrones, dominions, principalities, and powers that were originally created by Him (Colossians 1:16).

But who replaced the demonic entities who were disenfranchised of their positions of power? Of course, faithful angels continue to serve on the divine council. For example, Revelation chapters 2-3 show certain churches have angelic patrons. But not only angels. The Genesis creation account shows that mankind was always meant to share in the governance of creation, and Daniel had prophesied of a time when the righteous would shine like stars, a symbol of the rulership previously held exclusively by angels. The author of Hebrews shows that humanity has a destiny far higher than the angels (Hebrews 2). In other words, through Christ’s ascension, human are becoming part of the divine council. Again quoting from Fr. Stephen De Young:

“Now, through Christ, human persons have entered into glory and joined the divine council as part of the family of God. The promises of the Scriptures regarding Christ’s saints are not merely promises of passive rest but promises of participation in the rule and reign of Christ…. The Revelation of St. John characterizes the present age—during which Christ will reign over His enemies before His glorious appearing—as the time when the saints will be raised to rule and reign with Christ in the heavens (Rev. 20:4-5). Revelation then goes on to describe the role of the saints in glory as that of priests (v. 6) who will intercede before the throne of Christ….

It is for this reason that, since the very beginning of the Church, nations, cities, churches, families, and individuals who once were entrusted to ‘gods’ as their benefactors have instead found heavenly patrons in the saints. This is not, as some would suggest, some sort of concession to popular polytheism. Quite the opposite. It is a function of the gospel of Jesus Christ, which declares that the malign demonic powers who once enslaved the nations have been cast down (Gal. 4:8-9; Col. 2:8, 20) and that the saints now rule and reign with Christ, judging the nations as He promised.”

Who are these saints that share in the Most High’s rulership and intercede for us in the divine council? We could name many, but the most important is the Blessed Virgin Mary, known among the Eastern Orthodox by the reverential title the Most Holy Theotokos. During her earthly life, the Blessed Virgin showed her boldness as a mother by interceding for the couple who were getting married at the wedding of Cana, prompting Christ to perform His first miracle. Our Lady, now with her Son in the heavens as part of the divine council, continues to intercede for people in need.

But the Blessed Virgin is not alone. St. John’s vision in Revelation 20:4-6 shows saintly martyrs reigning with Christ prior to the final resurrection and last judgment. Their functions, like the vocations given to Adam and Eve, involve both royal and priestly offices (Rev. 20:4). As priests, they intercede for those still on the earth (Rev. 6:10); as kings and queens, they occupy authoritative positions (what St. John called “thrones”) forfeited by the rebellious hosts.