Ever since I read The Way of the Pilgrim last year and received “a word” from Archimandrite Zacharias at the Patriarchal Stavropegic Monastery of St. John the Baptist in Essex England, I’ve been intrigued (sometimes even obsessed) with the theme of gratefulness. One of the questions I’ve decided to study is this: to what extent does gratefulness depend on getting what we want, or is gratefulness a state of mind we can cultivate even when we don’t get the things we want? Moreover, to what extent can cultural changes effect basic gratefulness? 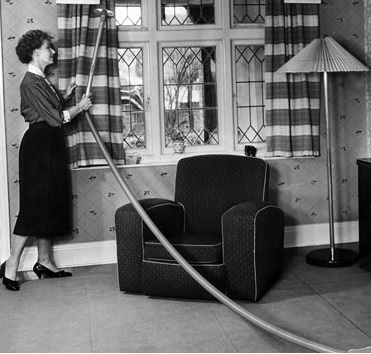 One of the books I read while researching this question is Ruth Cowan’s account of the sociological effects of household technologies. In her book More Work for Mother: The Ironies of Household Technology from the Open Hearth to the Microwave, Cowan shows that, contrary to common belief, household appliances like the washing machine and the vacuum cleaner have not led to housewives having more free time. While their work is easier qualitatively, it is not easier quantitatively: statistics show that women who choose the vocation of housewife are still working roughly the same amount of hours as the pre-industrial housewife. The causes of this are complicated and multi-faceted, but one significant factor is that the introduction of labor-saving devices was concomitant with expectations changing and standards going up. Electronic appliances from the vacuum cleaner to the oven have greatly increased the expectations we bring to all aspects of the household, from cleanliness to diet. What is now considered “normal” is the diet, cleanliness, clothing variety and house-size that was once normal only for members of the upper middle class who had servants.

As a culture, the average person now lives at the baseline of conditions that constitute wealthiness when wealth is calculated by historical standards. In the past, only kings would have been able to ride in a chariot with musicians playing in the back; now our stereo-equipped cars allow even a person of modest means to experience this luxury. In the past, only kings would have been able to own private bathing quarters where members of their household could soak in hot water at any time of the day or night; now almost anyone can experience this luxury in the average house equipped with a bathtub. Examples could be multiplied endlessly, but the point I wish to make is that the proliferation of so much wealth has not led to more gratefulness but to less. Researchers have found that a little money can buy a lot of happiness for a poor person while a lot of money can only buy a little happiness for a rich person; in a similar way, it seems that small blessings lead to a lot of gratefulness for poor people sooner than a lot of blessings lead to more than merely a little gratefulness for wealthy people. Ergo, as a culture we are very wealthy, and consequently it takes a lot to make us grateful, but then as soon as we have everything we want the baseline of our expectations shift, thus neutralizing our consciousness of blessing.

I’ll be posting more about gratefulness in the days to come, including how modern neuroscience confirms what church tradition has taught (following our Lord’s teaching in the sermon on the mount) about “reframing”. Reframing occurs when we take negative life experiences that would normally deplete us of gratefulness and turn see them as positive experiences that can increase our sense of gratefulness. But more about that later. For now, if you would like to read my notes from Cowan’s research, click on the following link:

The Ironies of Household Technology