Your Survival is in God’s Hands – so relax 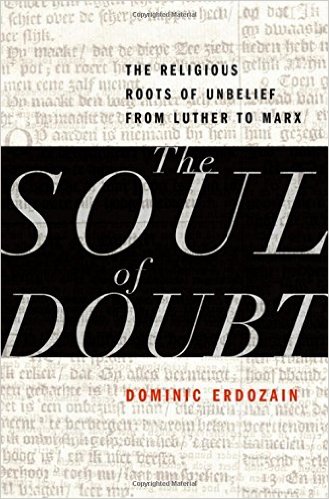 A common narrative of modernity is that secularization and skepticism about religion both grow out of, and accelerate, a decline in religion. Accordingly, religion and secularization are often seen like two sides of a zero-sum transaction, both of which compete for the same cultural space.

Among recent work undertaken to challenge this outlook, the latest and most exciting contribution comes from Dr. Dominic Erdozain, whose Soul of Doubt (Oxford, 2016) offers a fresh and disruptive perspective on the progression from Reformation to Modernity.

Erdozain, whom I had the privilege of studying under while doing graduate work at King’s College London, locates the roots of modern doubt in the religious conscience itself. He shows that the key figures associated with the modern secularization project—the philosophes, Spinoza, Voltaire, Darwin, Feuerbach and Marx—were actually motivated by impulses native to the Christian faith. The early propagators of secular enlightenment claimed the spiritual high ground against the religious structures of their day.

The idea that modern unbelief is actually rooted in Christianity may strike many as odd given the rigid dichotomies between “religion” and “secularism” that have now become commonplace. But Erdozain makes his case with careful analysis of the historical record, showing that key figures associated with modern unbelief were actually drawing on borrowed capital from Christianity itself. The soil in which unbelief and doubt finds fruition is not an objective, scientific reason progressively triumphing over ignorance and superstition; rather, it is a Christian conscience exercised against religion’s hypocrisies and failures. As such, the project of secular modernity has arisen not from a wholesale dismantling of religious ideas, but from their internalization, migration and metamorphosis. As Erdozain explains in the book’s introduction,

“…assaults on religious orthodoxy are seldom motivated by rigorous questions of intellectual plausibility. Rather, they are typically prompted by moral or spiritual anxieties, to which philosophical reasoning may or may not be subsequently added. Such anxieties, far from representing a pagan or secular distaste for Christian faith, have consistently emerged from a set of Christian assumptions and expectations.”

Ultimately The Soul of Doubt invites us to see secular modernity not as a war against religious ideas, but a war of competing religious concepts.

By highlighting the Christian roots of secularism, Erdozain has tossed the ball into the court of those who hold that religion progressively crumbles beneath a self-contained secularism. But he also challenges Christians who espouse simplistic and binary “worldview” analyses of the historical record. What emerges from Erdozain’s narrative is a history of the modern world that is much more complex than is often allowed by conservatives and liberals alike.

The Soul of Doubt also serves as a wake-up call to the church, lest our failure to model Christ give credence to our critics. As Chesterton once noted, the only unanswerable argument against Christianity is Christians.