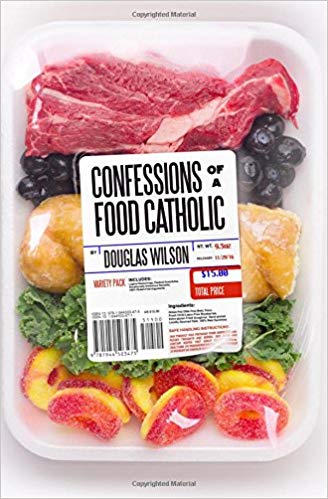 I was recently approached about Douglas Wilson’s 2016 book on food and asked if my articles interacting with his food teachings were still online somewhere. I have been out of the loop for so long that I didn’t even know that Doug had got round to writing this book, although when I had coffee with him about five years ago he told me it was in the works.

From a brief look at Wilson’s book on Amazon, it appears to repeat all of the same distortions, misunderstandings, eisegesis and caricatures that pervade his corpus of blog posts and videos on the subject. Moreover, he offers the worst sort of legalistic sectarianism mascaraing as catholicity.

Wilson’s rampage against health food has reached the point almost of madness, as he is declaring that subcultures in the church made up of food enthusiasts cannot be tolerated and much be expunged from the church. From page 161:

“The church is capable of including any number of subcultural groups within her pale, and can do so without great difficulty. Ham radio operators, rodeo riders, surfers, and rock climbers are all welcome. And what they all do the Saturday before worship does not disrupt the reality of their worship together. But food subcultures are a different matter. Food scruples are the deathly enemy of church unity.”

Wow, that is a pretty extraordinary thing for a Christian pastor to say given the clear teachings of Romans and Galatians. After all, if Paul could advocate a Jew-Gentile mixed church (Galatians), a church in which some people eat meat and other weaker brethren have scruples about eating meat (Rom. 14), then how much more should we be able to tolerate, in the name of charity, a church made up of people whose conscience allows them to eat junk food and other ‘weaker brothers’ whose conscience only allows them to eat organic or gluten-free food?

The point is not simply that Wilson misreads Romans 14, but that on ground-level his theories are divisive. Various people have shared with me that in communities influenced by Wilson’s teaching, they feel increasingly marginalized, stereotyped and judged for their decision to embrace a healthy lifestyle. Some have even told me that they have to keep secret what they buy at the grocery store for fear of being labelled and judged. A good dose of Christian freedom wouldn’t go amiss.

I raised this point back in 2013 in a series of articles interacting with Wilson’s idiosyncratic food theology. A couple days ago, at the urging of a reader, I dug up these articles, cleaned up all the links and republished them on this website, back-dating the articles to reflect their original dates of publication. All the links are given below.

Now that Doug Wilson has upped the ante by writing the aforementioned book, I think he owes the public some sort of response to the scriptural and pastoral concerns I raised back in 2013 about his  food theology. In fact, I’ll go even further: I publicly challenge Douglas Wilson to a debate. (The debate must either be a written debate or live but not timed, to give me opportunity to look up notes, key passages and Scripture verses as we go along.)

Here are the links to my five earlier articles along with four from other scholars who raised similar concerns. I hope these articles can be useful in bringing some Biblical balance to Wilson’s complex theories about food and health.