From “Virtue and Classical Education“: 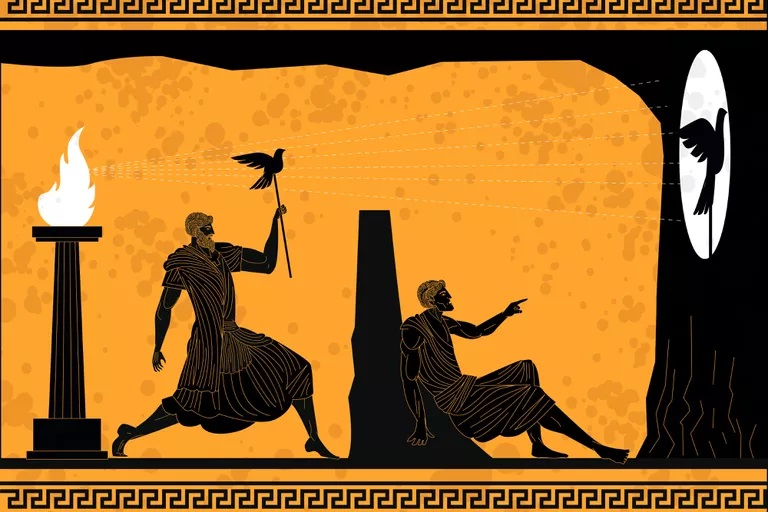 Education should thus serve the dual purpose of cultivating dispositions attuned to what is good, true and beautiful in this world, while also cultivating a sense of holy discontent that refuses to be satisfied with anything but God Himself. The manifestation of what is good, true and beautiful in creation should be seen as an icon of the Eternal Good, Truth, and Beauty, but it is only an icon; the reality towards which these qualities point can only be found in the beatific vision. That is why the most moving poetry, the loveliest music, the most beautiful literature, always leave us slightly unsatisfied. The best art points beyond itself and awaken within us deep yearnings for something more.

Recall Plato’s wonderful allegory about the cave. A group of people have been chained to the wall of a cave for all their lives. Behind them is a fire that causes shadows from the outside world to be projected on the cave’s wall. These shadows make up the prisoners’ only experience of the outside world. But imagine that one of the prisoners is suddenly freed. At first the light of the sun will hurt his eyes, and he might long to return to the familiar world of shadows. To his unaccustomed eyes, the shadowy forms in the cave seem more substantial than the world from which the shadows are but a dim reflection. Perhaps he is dragged up a rough ascent and out into the sun. This would no doubt give him pain and make him angry, which would only intensify his reaction against the radiant light of the sun. His pain would confirm him in his preference for the bondage of the cave over the freedom of the sunlit lands.

Whatever else this story may have meant for Plato, it certainly functions on one level as an allegory of education, and the role that philosophers serve in pointing us to ultimate forms. For us today, the equivalent to Plato’s philosophers would be our parents, teachers, and clergy, who keep dragging us into the light, sometimes against our will. When our eyes are still unaccustomed to looking upon higher things, the transitory things of this world (e.g. things like fast-food, television, popular music, computer games) seem more real to us. And yet our teachers drag us away from these vanities into the world of liberal arts, a world that will be freeing if we surrender to it long enough for our eyes to become accustomed to its light. In a similar way, our parents force us to develop good habits—habits that seem monotonous and unexciting at times—in order that we may experience the liberating effects of virtue.

That is not all there is to Plato’s allegory of the cave. Once the liberated man can fully see and understand, he has pity for the remaining cave-dwellers. He returns to the cave with a message of liberation. He explains to the other prisoners that there is a reality for which the shadows on the wall are but a dim reflection. Yet unable to imagine anything beyond their present world of shadows, the prisoners prefer to remain in the cave. They have mistaken the world of appearance for the reality itself.

We do not live in a cave. We live in a world where we are surrounded by beauty and love, where every day we taste from heavenly blessings graciously bestowed on us by the Creator. Yet compared to the eternal realities awaiting us in the new heavens and the new earth, even these earthly blessings are but dim shadows. Our sin ties us to the bondage of chasing after shadows within the immanent sphere, rather than using these shadows as a ladder to ascend to the transcendent realities they reflect. This is a bondage from which we cannot escape ourselves. We are like prisoners chained to the cave, always dragged down by transient ends and transitory pleasures. Or, as St. Augustine eloquently put it in Book Two of The Confessions, “the soul commits fornication when she…seeks apart from thee what she cannot find pure and untainted until she returns to thee.” The solution to this—which Plato could not conceive even in his wildest dreams—is when the true form of The Good became enfleshed and entered into the cave with us, to free us and show us the way out. Thus, the ultimate answer to the problem of the cave is not in philosophy, as Plato thought, but it joining ourselves to the God-man and availing ourselves of His redemption.

One of the deepest theological reflections on Plato’s cave comes from the Victorian poet Coventry Patmore, and his posthumously published book The Rod, The Root and the Flower. Let me read you a passage from the book.

“Plato’s cave of shadows is the most profound and simple statement of the relation of the natural to the spiritual life ever made. Men stand with their backs to the Sun, and they take the shadows cast by it upon the walls of their cavern for realities. The shadows, even, of heavenly realities are so alluring as to provoke ardent desires, but they cannot satisfy us. They mock us with unattainable good, and our natural and legitimate passions and instincts, in the absence of their true and substantial satisfactions, break forth into frantic disorders. If we want fruition we must turn our back to the shadows, and gaze on their realities in God.

Freedom is Goodness Made Fruitful

It may be added that, when we have done this, and are weary of the splendors and felicities of immediate reality, we may turn again, from time to time, to the shadows, which, having thus become intelligible, and being attributed by us to their true origin, are immeasurably more satisfying than they were before, and may be delighted in without blame. This is the ‘evening joy,’ the joy of contemplating God in His creatures, of which the theologians write; and this purified and intelligible joy in the shadows—which has now obtained a core of substance—is not only the hundredfold ‘promise of this life also,’ but it is, as the Church teaches, a large part of the joy of the blest.“

Patmore understood that when heavenly shadows reach us they can provide limited satisfaction, and can even be delighted in, yet this very delight depends on recognizing these shadows as reflections of a higher reality. This is comparable to a man taking delight in a portrait of his beloved because it is such a good reflection of her. But the man would be a fool if he became so attached to the painting that he could not leave it to see the woman herself when she had arrived in town. Similarly, once the good and beautiful things of this world are treated as ends in themselves, they become empty sources of illusory promises. The beauteous forms that haunt our world become mere cheats unless they serve as icons of something beyond themselves.

David Fagerberg, who teaches liturgical theology at the University of Notre Dame, reminds us that we should not spurn the genuinely good things of this world, but recognize them as prototypes of deeper desires that can only be fulfilled in God. “Because we are in the image of God,” he writes in Consecrating the World, “we have a desire for God, and the icon will always seek its prototype; but because we are fallen, our desire regularly fastens upon inadequate objects. That is why it is so important to keep our desire alive… Once our desire has attained any finite object, we will know that this was not the true country for which we yearned. We must live from the paradoxical tension of neither spurning nor being satisfied with any earthly blessings… Earthly goods can arouse our appetite for heavenly goods so long as we do not fixate on them.”