The Connection Between Reading, Imagination and Communication Skills

Over the last few years I have published a number of articles about modesty in which I have attempted to situate Christian teaching about modesty within a context of affirmation rather than negation. In some of these articles I have argued that parents should not allow their children to watch movies which include nudity or sexual content, and even that parents and young people alike should observe standards of modesty while at the beach or swimming, regardless of the behaviour of others.

This is a very controversial subject, even among Christians, but I hope my articles will add some sanity to a topic that is often tinged with emotion. I have received a lot of negative feedback because of my stand on this subject, even though my position is far from extreme. If you are having discussions about modesty with your teenage son or daughter, some of my articles from the past few years may be a valuable resource. Not all of these articles are on the topic of modesty, but each article has at least one or more sections that thought on why it’s important to be modest:

“When talking about the importance of modesty, young men and young women alike will often respond to me by saying something like the following: ‘Women who wear bikinis are not trying to be provocative. This is just what women wear for swimming suits these days, and you shouldn’t import sexual connotations onto it.’

Although I think this is often naïve and wishful thinking, my response is to take the young people at their word and to assume, for the sake of argument, that there really is nothing sexual in the minds of those women who strip down to a bikini, or those men who defend the practice as ‘not having anything sexual about it.’ I then point out that if the female body can be almost entirely revealed without the presence of erotic overtones than this only shows how desexualized we have become. Indeed, if a woman can strip down to a bikini in the presence of men without having any thought of the sexual overtones, then this only shows that she has let her body become demystified, that her God-given barriers have been lowered, and that her bare flesh has been evacuated of its inherent eroticism. And this is exactly what early advocates of nudism hoped would happen. (Incidentally, it is also what early advocates of sex education wanted to see happen.)

I suggest that we are drifting towards being neuter when the signals of our sexuality are treated as anything less. If we reach the point where attire which conceals less than underwear (e.g. contemporary beachwear) is perceived as anything short of being utterly erotic, disarmingly sexual and totally provocative, then we have actually repressed an important part of our sexuality. Being in a condition of undress has been unnaturally disengaged from the sexual connotations that ought to accompany it. It follows that the line ‘there’s nothing sexual about this’ is as much an indictment against immodesty as it is a defense of it.

Perhaps God never intended for the semi-naked body to be demystified like this. Perhaps seeing someone of the opposite sex in a state of undress (whether on the beach or on television), was never meant to be disengaged from its sexual connotations and to become merely ‘ordinary’ so that we can say ‘Oh, that doesn’t affect me.’ Perhaps we were never meant to become so detached that seeing someone’s genitals becomes like looking at their elbow. Perhaps it is for this very reason that we are supposed to protect our eyes, to make responsible decisions about how we dress and what we watch on television. Perhaps it is for this very reason that the Bible places such a premium on modesty (see 1 Timothy 2:9–10 and 1 Peter 3:3 for starters), restricting nudity between the sexes to the marriage bed.

Some women have told me that modesty is important to them, not only because it helps men not to stumble, but also because it helps them place a high value on their own sexuality. They have told me that modest apparel affirms the true importance of a woman’s sexual identity, since it proclaims that her body is not tame, benign, and commonplace. Modesty affirms that our bodies in general and our sexuality in particular are special, charged, even enchanted, and too exciting to be put merely to common use. As Kathleen van Schaijik suggested in a 1999 article, “If we revere something, we do not hide it. Neither do we flaunt it in public. We cherish it; we pay it homage; we approach it with dignity; we adorn it with beauty; we take care that it is not misused.” 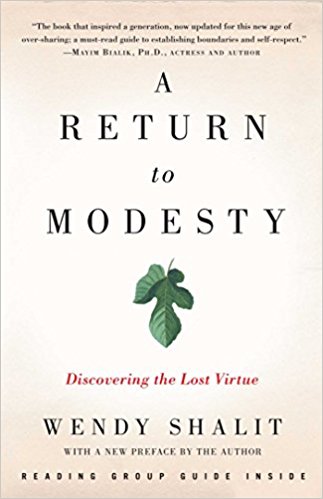 Precisely for this reason, a modest woman significantly upgrades the significance of what is happening when she undresses in front of her husband. As Havelock Ellis observed (stumbling upon the truth for one of the few times in his life), “without modesty we could not have, nor rightly value at its true worth, that bold and pure candor which is at once the final revelation of love and the seal of its sincerity.”