Don’t Take Short-Cuts With Your Teenagers 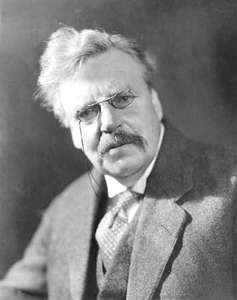 “…what we suffer from to-day is humility in the wrong place. Modesty has moved from the organ of ambition. Modesty has settled upon the organ of conviction; where it was never meant to be. A man was meant to be doubtful about himself, but undoubting about the truth; this has been exactly reversed. Nowadays the part of a man that a man does assert is exactly the part he ought not to assert himself. The part he doubts is exactly the part he ought not to doubt — the Divine Reason. Huxley preached a humility content to learn from Nature. But the new sceptic is so humble that he doubts if he can even learn. Thus we should be wrong if we had said hastily that there is no humility typical of our time. The truth is that there is a real humility typical of our time; but it so happens that it is practically a more poisonous humility than the wildest prostrations of the ascetic. The old humility was a spur that prevented a man from stopping; not a nail in his boot that prevented him from going on. For the old humility made a man doubtful about his efforts, which might make him work harder. But the new humility makes a man doubtful about his aims, which will make him stop working altogether. At any street corner we may meet a man who utters the frantic and blasphemous statement that he may be wrong. Every day one comes across somebody who says that of course his view may not be the right one. Of course his view must be the right one, or it is not his view. We are on the road to producing a race of men too mentally modest to believe in the multiplication table. We are in danger of seeing philosophers who doubt the law of gravity as being a mere fancy of their own. Scoffers of old time were too proud to be convinced; but these are too humble to be convinced. The meek do inherit the earth; but the modern skeptics are too meek even to claim their inheritance.” G.K. Chesterton