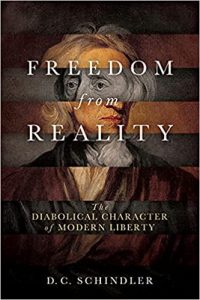 I often talk about freedom in terms of growth/flourishing, and one of the examples I frequently use is an acorn. For an acorn to be truly free is for it to grow into an oak tree, just as humans are only truly free when enabled to flourish according to the ends appropriate to them. As I explained in my Salvo article, After Tragedy, “A tree that is uprooted is not truly free to realize its proper end, just as a community without any laws is hindered from realizing its proper end of well-regulated and rightly ordered human beings.”

I recently bought a copy of D.C. Schindler’s 2017 book Freedom from Reality: The Diabolical Character of Modern Liberty, and I was intrigued to see him using the growth metaphor to discuss freedom. Chapter 6 takes a deep dive into the etymological origins of “freedom” and “liberty”, and their equivalents in Greek, Latin, and Anglo-Saxon. It is a fascinating discussion, and Schindler identifies some common themes that emerge from the linguistic pedigree. In the processes of this discussion, Schindler points out that the Greek word for freedom derives from an Indo-European root that gave rise to the Gothic verbs for “grow” and “develop.” He then comments,

Anything that “stunts growth,” or in other words that imposes itself from the outside, in such a way as to impede the natural flow, so to speak, from an internal principle, can be understood as a limitation of freedom.

Drawing on the work of Robert Muller’s French-language work, Schindler shows how this idea of freedom as growth relates to negative idea of liberty that most people presuppose today (the idea that freedom merely means the absence of restraint) as well as the idea of freedom as limit-breaking.

Robert Muller insightfully connects this positive meaning with the relatively common associations of freedom in its negative sense—freedom from constant, and so forth—by emphasizing the organic sense of the term: freedom, he explains, means ‘unimpeded growth,’ the attainment of the full development of one’s seed, as it were. To grow means to exceed limits, and therefore in a sense to transgress a set, external boundary. We see immediately how this sense of freedom as a sort of internal impulse would imply “nonconstraint,” though it is also clear that this negative sense is the derivative one, founded on the positive notion of an inward principle of growth.

I have recently been critical of the negative idea of liberty (see here and here), out of concern that it evacuates liberty from any teleological orientation towards flourishing. I have also been critical of the idea of freedom as limit-breaking, out of concern that this opens up space for moral transgression (see here). But if Schindler and Muller are correct, there is something to be said for the negative aspect of liberty if and when it is contextualized in terms of growth that is teleologically consistent with an organism’s purpose. When the negative and derivative idea of freedom is unhinged from the positive and original notion of an inward principle of growth, then the result is a state of affairs deeply unfree.