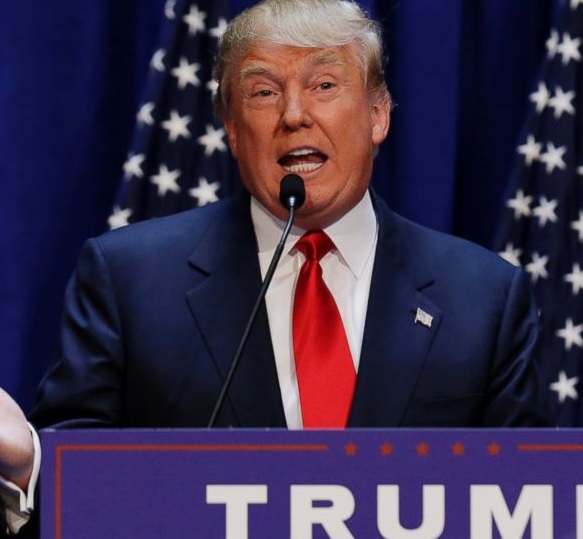 Since I stopped working for Christian Voice earlier this year I completely lost interest in politics. Politics is important, so maybe I should be more interested in it, but I’m just not (with the exception of what’s happening in the Middle East and with Russia). Because of this, I haven’t been keeping up with the election news, and that meant that I came in for a big shock a few weeks ago.

You see, at the beginning of the campaigning I heard that Donald Trump was running for President as a joke. I thought that was funny. The shock came when I recently found out that Trump is in the lead and actually has a good chance of winning the Republican nomination. The joke has turned serious.

How can someone as rude and bombastic as Donald Trump achieve such a following? The answer is not difficult. Trump appeals to Americans because his common-sense approach is simple and straight-forward, and this is refreshing after 8 years of Obama. Because Americans are naturally suspicious of the sophistry of someone who sounds like a smooth politician, Trump’s simple, down-to-earth, pragmatic, no-nonsense approach can cover over a multitude of offensiveness.

Americans have a long history of a kind of pragmatism that grows weary of too much complexity and intellectualism. This is reflected in our voting practices and perhaps explains why Americans were susceptible to a simple and unsophisticated candidate like Warren Harding after a complex intellectual like Woodrow Wilson nearly ruined the world, or why George W. Bush seemed attractive after the corruption of a slick president like Bill Clinton. Perhaps once again Americans have been “primed” to desperately desire a keep-it-simple-stupid-pragmatist. One typical voter recently observed,

“Intellectuals make simple things complicated, and FAIL in real life. Because while real life may be complicated, you create progress by making it simple. By getting things done. Stop thinking, start doing. Stop considering, make a decision.”

Dumbing -Down The Presidency

Professor Lim amassed evidence to show that the political climate in America increasingly favors presidents who reflect the values of simplicity. Consequently, the speeches given by presidents are increasingly filled with vacuous statements that do not invite rational disputation. Speeches are designed to maximize applause lines, stroke the emotions and appeal to our intuitions, while being lean on substantive content. As such, presidential rhetoric completely bypasses the type of higher order thought necessary for proper analysis.

I wrote about Lim’s book at the Colson Center where I commented as follows about his observations:

Lim has amassed an impressive array of evidence to chronicle the steady dumbing-down of Presidential rhetoric. He calls this dumbing-down process “anti-intellectualism”, and with good reason. He contrasts it with the classical understanding of rhetoric. For the ancients, good rhetoric included logos (the weighing and judging of reasons for a particular course of action), ethos (the credibility of the speaker) and pathos (emotional appeal). “Presidential rhetoric today” Lim writes, “is short on logos, disingenuous on ethos, and long on pathos.”

Lim also criticizes Presidential rhetoric for its simplicity. He quotes the famous Presidential speech writer Peggy Noonan who once said, “It is simplicity that gives the speech its power… And we pick the signal up because we have gained a sense in our lives that true things are usually said straight and plain and direct.”

What’s wrong with Noonan’s approach? When Lim was being interviewed by Ken Myers, he suggested that “simplicity does not guarantee the truth, only the semblance of sincerity….It is true that most of the time when we are being truthful we say things simply and we don’t hide behind the obscuration of words – that’s exactly true. But that has no relation to the truth content of what’s being said at all. A highly rhetorically adept person can well articulate things simply and yet conceal them precisely via the simplicity of his words.”

Why It’s Important to Get Liberty Right

If, as Lim argues, the American public no longer expects their presidents to give speeches conforming to the canons of rational argumentation, then it should come as no surprise to find a similar “anti-intellectualism” among those running for president. Like the presidents they hope to become, candidates will typically seek to inspire hearers through the strategic use of evocative imagery, but will rarely develop a structured argument with a conclusion that follows logically from premises.

In marketing platitudes instead of defending ideas, presidential hopefuls are simply practicing what it will take to become President of the United States.

Donald Trump may be the epitome of this type of anti-intellectualism. When Donald Trump speaks to the American people in a way that has been observed to be “brash, blunt and direct — and speaking at the level of a fourth grader”, he is echoing what the Americans want to hear. Because we are pragmatists at heart, we want simplicity rather than abstractions; because we are egalitarians at heart, we want someone who sounds like “one of us.” Trump satisfies these criteria to a tea.

The book of Proverbs warns us against the folly of what it calls “simplicity”, which it continually contrasts with wisdom. To the degree that Americans value simplicity more than wisdom, Trump may be the candidate we deserve.