Neuroscience and the Power of Speech

In G.K. Chesterton’s book Saint Thomas Aquinas: “The Dumb Ox”  there is a section at the end where Chesterton describes Luther’s rejection of Thomism. There is not a little of Chesterton’s own Personality here (ironic because of what he says about Luther), and much rhetorical exaggeration, but I found the account of Luther’s bonfire rather interesting. I have no idea if it is accurate (does anyone know if Luther really burned Aquinas’ works?) but it makes a fun read: 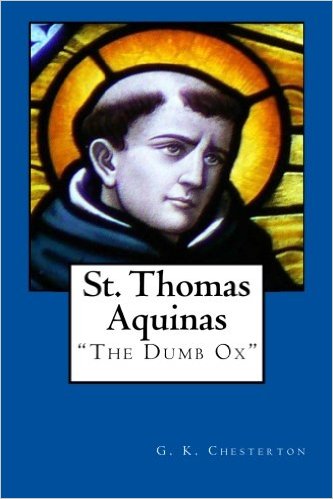 It came out of its cell again, in the day of storm and ruin, and cried out with a new and mighty voice for an elemental and emotional religion, and for the destruction of all philosophies. It had a peculiar horror and loathing of the great Greek philosophies, and of the Scholasticism that had been founded on those philosophies. It had one theory that was the destruction of all theories; in fact it had its own theology which was itself the death of theology. Man could say nothing to God, nothing from God, nothing about God, except an almost inarticulate cry for mercy and for the supernatural help of Christ, in a world where all nature things were useless. Reason was useless. Will was useless. Man could not move himself an inch any more than a stone. Man could not trust what was in his head any more than a turnip. Nothing remained in earth or heaven, but the name of Christ lifte in that lonely imprecation; awful as the cry of a beast in pain.

We must be just to those huge human figures, who are in fact the hinges of history. However strong, and rightly strong, be our own controversial conviction, it must never mislead us into thinking that something trivial has transformed the world. So it is with the great Augustinian monk, who avenged all the ascetic Augustinians of the Middle Ages; and whose broad and burly figure has been big enough to block out for four centuries the distant human mountain of Aquinas. It is not, as the moderns delight to say, a question of theology. The Protestant theology of Martin Luther was a thing that no modern Protestant would be seen dead in a field with; or if the phrase be too flippant, would be specially anxious to touch with a bargepole. That Protestantism was pessimism; it was nothing but bare insistence on the hopelessness of all human virtue, as an attempt to escape hell. That Lutheranism is now quite unreal; more modern phases of Lutheranism are rather more unreal; but Luther was not unreal. He was one of those great elemental barbarians, to whom it is indeed given to change the world. To compare those two figures bulking so big in history, to any philosophical sense, would of course be futile and even unfair. On a great map like the mind of Aquinas, the mind of Luther would be almost invisible. But it is not altogether untrue to say, as so many journalists have said without caring whether it was true or untrue, that Luther opened an epoch; and began the modern world.
He was the first man who ever consciously used his consciousness; or what was later called his Personality. He had as a fact a rather strong personality. Aquinas had an even stronger personality; he had a massive and magnetic presence; he had an intellect that could act like a huge system of artillery spread over the whole world; he had that instantaneous presence of mind in debate, which alone really deserves the name of wit. But it never occurred to him to use anything except his wits, in defense of a truth distinct from himself. It never occurred to Aquinas to use Aquinas as a weapon. There is not a trace of his ever using his personal advantages, of birth or body or brain or breeding, in debate with anybody. In short, he belonged to an age of intellectual unconsciousness, to an age of intellectual innocence, which was very intellectual. Now Luther did begin the modern mood of depending on things not merely intellectual. It is not a question of praise or blame.; iot matters little whether we say that he was a strong personality, or that he was a bit of a big bully. When he quoted a Scripture text, inserting a word that is not in Scripture, he was content to shout back to all hecklers: “Tell them that Dr. Martin Luther will have it so!” That is what we now call Personality. A little later it was called Psychology. After that iwas called Advertizement or Salesmanship. But we are not arguing about advantages or disadvantages. It is due to this great Augustinian pessimist to say, not only that he did triumph at last over the Angel of the Schools, but that he did in a very real sense make the modern world. He destroyed Reason; and substituted Suggestion.

It is said that the great Reformer publicly burned the Summa Theologica and the works of Aquinas; and with the bonfire of such books this book may well come to an end. They say it is very difficult to burn a book; and it must have been exceedingly difficult to burn such a mountain of books as the Dominican had contributed to the controversies of Christendom. Anyhow, there is something lurid and apocalyptic about the idea of such destruction, when we consider the compact complexity of all that encyclopaedic survey of social and moral and theoretical things. All the close-packed definitions that excluded so many errors and extremes; all the broad and balanced judgments upon the clash of loyalities or the choice of evils; all the liberal speculations upon the limits of government or the proper conditions of justice; all the distinctions between the use and abuse of private property; all the rules and exceptions about the great evil of war; all the allowances for human weakness and all the provisions for human health; all this mass of medieval humanism shriveled and curled up in smoke before the eyes of its enemy; and that great passionate peasant rejoiced darkly, because the day of the Intellect was over. Sentence by sentence it burned, and syllogism by syllogism; and the golden maxims turned to golden flames in that last and dying glory of all that had once been the great wisdom of the Greeks. The great central Synthesis of history, that was to have linked the ancient with the modern world, went up in smoke and, for half the world, was forgotten like a vapour.