The Republican Retreat to Identity Politics

As Jordan Peterson’s Channel 4 interview goes viral (indeed, it reached #7 for all of YouTube), I have been delighted to see it provoking international discussion, not just about the issues he raised, but about the nature of conversation itself. This is a classic case of ideology causing a two-person dialogue to turn into a three-person dialogue: a conversation between the positions of Person A, the positions of Person B, and the positions that Person B ascribes to Person A.

One of the easiest mistakes to make in political discourse is to assume you know where the other person is “coming from” and to then “hear” what they are saying through the framework of those assumptions, just as Cathy Newman did with Jordan Peterson.

The reason it’s so easy to make this mistake is that often a person’s position on a certain issue invokes a larger ideological framework that is easily recognized, labelled and dismissed. For example, we can often tell by someone’s position on tax-law or abortion or immigration whether they are “left-wing” or “right-wing.” Because of this, instead of interacting with someone’s position on a specific political issue we often end up arguing against the entire network in which we suppose the person’s position is situated. This can lead us to miss crucial nuance and complexities that might be present in the other person’s view. After all, not everyone fits into easily identifiable boxes.

In 2002, the psychologist Patricia Healy Evans wrote a book called Controlling People. In it she explained how a basic human instinct is to connect with others. But this instinct can misfire, resulting in disordered connections between the self and others. When our instinct to connect with others is disordered, what often happens is that we don’t know how to relate to others without being controlling. Now when psychologists talk about someone “being controlling”, they aren’t merely referring to behavior that is bossy and authoritarian; controlling behaviors can also include redefining others, subtly twisting what another person says to fit within our own categories, sublimating another person’s words and thoughts into the frameworks we can comfortably manage. In short, the controlling impulse arises from an ability to treat others as others. We do this all the time in political conversations. 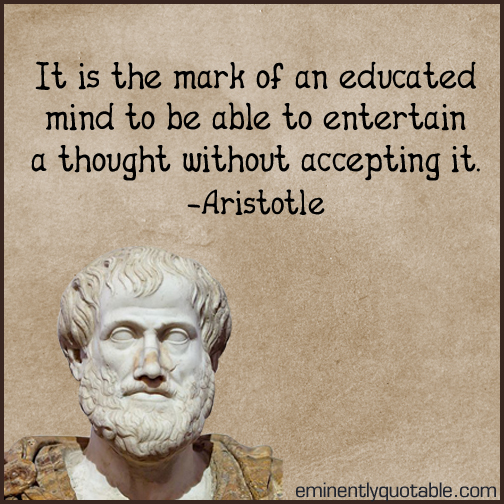 So how can we move from what I call “controlling listening” to listening with attentive understanding even when we disagree? Part of the answer to this question was given to us by Aristotle, who is widely quoted as saying that the mark of an educated mind is the ability to entertain a thought without accepting it. To entertain a viewpoint that you personally disagree with is to understand that view from the inside, on its own terms. Being able to do this will make you a more effective communicator since it enables you to actually listen to other people’s concerns instead of interacting with a caricature of their position. Before you can tell someone that their political views are wrong, you need to first be able to truly hear what they’re saying.

But how do you know whether you’ve achieved attentive understanding of those with whom you disagree? Here’s a good rule of thumb: if you can summarize the other person’s concern in your own words, so that the other person can say “Yes, that’s what I’m trying to say”, then that is a pretty good indication that you’re on the right track. If you can’t do this, then you need to learn to be a better listener before offering a critique. I try to make a habit whenever I am having a political discussion with someone to take a step back and try to summarize what I think the other person is trying to say. This helps the other person to know that I am really trying to listen which, in turn, helps them to be more receptive of what I might have to offer. Conversely, if I’m having discussion with someone and I feel like they are not listening, I will stop them and say “Excuse me, would you mind summarizing in your own words what you think I’m trying to say?”

This isn’t just a rhetorical trick to break down barriers. It actually gets to the heart of what makes us distinctly human. Alone among the beasts, human beings have the capacity to imaginatively relate to experiences and thoughts far removed from our own. Being able to extend our minds and emotions into beliefs and experiences different from our own is the foundation for empathy, creativity, connection, wisdom, and planning for the future. It’s also the foundation for effective political dialogue.