Things were slow earlier today, as I sat behind the reference desk at the Whitworth library.

Shortly before my lunch break, a few patrons came into the building. One of our visitors was a previous professor at the university who is now writing a book on the history of music ministry in the United States. I had the opportunity to help him access a database of unpublished PhD theses.

When I wasn’t answering questions or helping patrons with research, I worked on an extended research project for one of the faculty members. He had asked the librarians to dig into the university archives to gather information for a history of the history department.

The joy of being able to help scholars and students flourish in their own domains reminded me of an experience I had yesterday evening when I went to the lake with Timothy and Susanna.

The heat of the day had already passed when we arrived near the spot where the Spokane River flows out of Lake Coeur d’Alene. A slight chill in the evening air didn’t stop Susanna from jumping right in and swimming out to the deep. Timothy and I stood cautiously by the shore, content with passing the frisbee back and forth.

Eventually, at Susanna’s frequent insistence, I swam out to meet her in the deep. After splashing around for five minutes, I observed a small speck about fifteen feet away in paroxysms of frantic movement. Swimming up to the spot, I saw that it was a bumble bee.

The bumble bee was in great distress as he tried to fly out of the water. All he gained from his desperate attempts was to spin himself in circles. Occasionally, he would stop spinning to angrily beat against the water surface, not realizing that he was only making his wings more wet in the process. 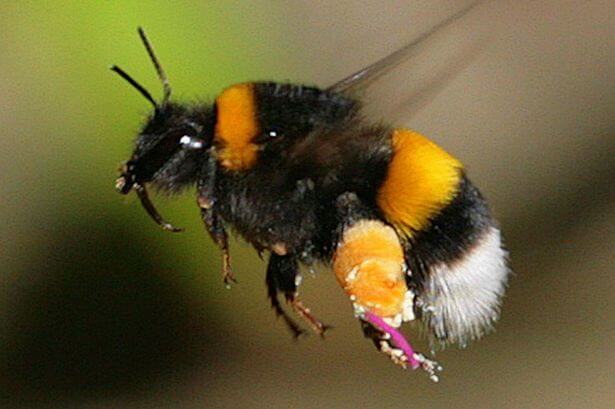 My heart went out to the little creature. His lonely struggle against the forces of nature reminded me of the character in Ernest Hemingway’s The Old Man and the Sea. I wanted to help him, but at the same time felt some caution. Do bumble bees sting? This wasn’t the first time I had wondered about this question. Once I went online to try to find out if bumble bees sting, only to find contradictory answers. But even if I could pick up the little creature, it wasn’t clear how I could help. Then I had an epiphany.

“Quick!” I yelled to the shore, where Timothy stood with the frisbee. “Throw me the frisbee so I can use it as a boat for a stranded bumble bee!”

The frizby landed about 10 feet from me. By the time I retrieved the frisbee and swam back to the bee, Susanna had arrived on the scene. Using the upturned frisbee, we managed to scoop up the insect and secure him in it. The upside down frisbee made a perfect raft for the little fellow, who by now had worked himself up into a fit of indignation.

Susanna and I began the journey to shore, alternating between swimming and pushing our make-shift boat that carried its solitary passenger. By the time we came close enough to the shore to stand up, we began carefully to pour the excess water out of the upturned frisbee, hoping this would give the bumble bee a chance to dry. With the water removed, the bee’s wings dried remarkably fast. After about ten seconds, he suddenly took off, flying almost vertically above us. The three of us stood and watched until the bumble bee was a mere speck in the evening sky.

“It is so satisfying to help the bumble bee flourish according to his nature!” I exclaimed to Timothy and Susanna.

As I said this, I remembered a legend about Thomas Aquinas, from the time when a grand duke visited the convent of St. Jacques in Paris. Thomas and the Duke went for a walk on the left bank of the Seine River where a number of merchants were selling birds in cages. Wishing to express his appreciation to Thomas and the Dominican Order, the Duke offered to buy Thomas a gift.

“If you want to give me a gift, then please buy all these birds for me,” Thomas said.

Eager to please his Dominican friend, the Duke obliged. Once every single bird in the market had been purchased, the Duke inquired what Thomas planned to do with the birds.

“Open the cages!” Thomas exclaimed. For Thomas, the great philosopher of teleology, there could be no greater gift than enabling his feathered friends to fly, and thus to flourish according to their nature.

The satisfaction Aquinas felt as he watched the birds fly must have been similar to what I experienced after rescuing the bumble bee.

I thought about these events after returning to the library’s reference desk from lunch. But then my reverie was interrupted by a man in a white beard, who looked confused.

After some discussion, I learned that this man needed some resources on the psychology of aging for a graduate degree he was pursuing in Marriage and Family Counseling. Ten minutes later I had him established contentedly at a desk, deep in a pile of books and journal articles.

Returning to the reference desk, my mind inevitably reverted to the little bee. It struck me that there are parallels between the work of an academic librarian and the work I had undertaken to rescue the bee. In a university library, your goal is always to help the patron fulfil whatever purpose is important for him or her. For example, in both the queries I handled that day, it began with someone a bit confused and overwhelmed, and ended with me leaving them with the materials they needed, deeply engrossed in research. To enable scholars to succeed gave me a similar sense of delight as when I stood on the shore with the children and watched the bumble bee fly high up into the air.

Being able to help people is one of the main reasons I chose to go into the field of library science. Last year when I was considering a career change but unsure what field to go into, one of the things I looked at was professional counseling because of the opportunity it afforded for helping people. I concluded that I would make a terrible counselor since I have so many problems of my own. However, that didn’t stop me from phoning up an admissions agent at a recommended university to find out how much a Master’s in Counseling cost.

The admissions agent had a graspy voice, and came across as both enthusiastic and a no-nonsense, down-to-earth type of person . He was very engaging and told me about his own foray into the world of counseling.

“Before we moved to the new campus, I had a good relationship with a psychologist named Lisa. She had an office down the hall from me. Man, she had some hard cases, I’m telling you!”

“Well, Lisa would try all sorts of things to help her clients. You know, all the usual stuff: psychoanalytic, person-centered, cognitive behavioral, touchy-feely, you name it. But when nothing would work, and she had tried everything the textbooks told her to do, she gave them THE TREATMENT.”

“The treatment?” I inquired curiously. “What exactly was that?”

At this point the admissions counselor lowered his voice to almost a whisper, as if he was letting me in on a secret. “She sent them down the hall, to the last door on the left.”

“What was waiting on the other side of that door?”, I asked, hardly able to contain my growing curiosity?

“Me,” he said triumphantly. “I was the last trick in her toolbox! Lisa would send her difficult cases down to me for the treatment.”

“What did you do to them?” I asked nervously.

“It was simple: I would just tell them to stop. I said, ‘Look, I don’t know who you are, and I don’t know what your problems are. But I do know that, whatever you’re going through, you don’t need to continue. You can choose to get better if you really want to.”

“How did the people react to you saying this?” I asked incredulously.

“Oh, they would always start telling me all the usual BS about their childhood, how complicated their issues were, how I didn’t understand, and all that. I would respond, ‘You’re right, I don’t understand, and moreover, I don’t want to. Lisa hasn’t told me anything about your situation because that would violate confidentiality. All I know is that if Lisa decided you were ready to be sent down the hall, then she knew it was time for me to tell you that you can change if you really want to.”

“Sometimes I wouldn’t even say that much,” he continued. “Often I would simply look the person in the eye and yell ‘Stop!’ Then I would send the person back to Lisa for all the touchy feely stuff.”

“I can’t imagine that this treatment was very effective,” I replied aghast.

“Oh,” he said. “It was extremely effective. Lisa and I had a great symbiotic relationship. Often the person would never come back to Lisa, a sure sign that they had reached a state of psychological independence.”

“Lisa is on the other side of the campus now, so I don’t get the chance to help her out,” he added, with a tone of regret in his voice. “I kind of enjoyed it, you know. Some of those people—man, I really hammered them good!”

It may have just been my imagination, but as he talked I thought I detected a tone of fiendish delight?

I had come away from that phone call amazed, and not a little surprised that such unorthodox therapy methods were tolerated in California of all places. I don’t know if it was that conversation that helped make up my mind, but it was around the time of that call that I abandoned the idea of going into behavioral health and decided to pursue library science instead.

When my time at the reference desk was over and I began gathering together my stuff, my thoughts turn again to that phone call, and the bizarre relationship the admissions agent had with the psychologist. Then I thought again about the bumble bee. The bumble bee wasn’t ready to embrace independence until we had carefully separated him from the water. Sometimes people are like that—they aren’t ready to leave behind their problems until someone has patiently helped them reach a point of independence. That is why I disagreed with the methods of the admissions counselor. To tell someone to “just stop,” can be as useless as telling the bumble bee to “just fly.”

But then, I thought, maybe the admissions agent was onto something. Sometimes we need to be told when we’re ready to stand up and make a change, just like the bee was ready to fly once we got him to the shore.

Whatever the case may be, I was glad that I had decided to become a librarian and not a counselor.